Home / Gardening Guides / COB Vs. CREE Led Lights: What Is The Difference?

COB Vs. CREE Led Lights: What Is The Difference?

LED lights are consistently being improved to offer greater versatility, greater use, and more efficient power use.

The different types of LEDs are well-known, and the difference is easily spotted when they are placed side-by-side with the conventional incandescent light.

This is because they are 25 times more likely to outlive the traditional incandescent light, plus they tend to use less energy. 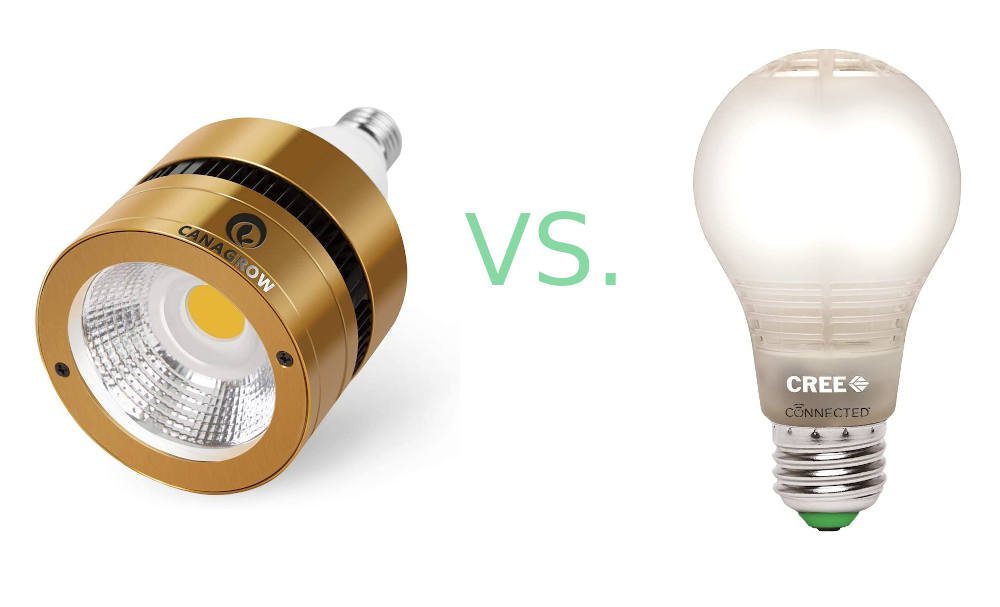 This article provides vital information to know when looking for the difference between the COB and CREE LED lights.

Depending on the amount of energy you consume, versatility, and energy efficiency, you can tailor your needs to be in concert with the type of LED lighting system you need.

There are many factors that make one opt for a particular lighting system. So pay close attention!

What is CREE Led Light?

Cree is an LED lighting technology that doubles as one of the most innovative lighting solutions in the market.

This includes LED technology that is devoid of mercury. This technology outpaces the conventional lighting system, which is increasingly becoming obsolete.

The products of Cree include:

In a shatterproof, durable housing, a modern Cree light can deliver:

They use about 85% less energy than they should during their lifetime.

Being a superior LED light, the new Cree LED light has obtained the ENERGY STAR accreditation. This is because i8t has met all the performance standards of ENERGY STAR.

What is COB Led Light?

Chip-on-Board (popularly called COB) is an LED-styled system that features the direct mounting of several LED chips on the top of a substrate to produce an LED system with a single module.

These numerous LEDs have a tiny size, plus they are packaged and wired together to form a single copper or ceramic board to enable them to act as a single light source.

The energizing of a packaged COB makes it assume the appearance of a lighting panel rather than numerous single lights, as seen in specific PLED packages.

This is similar to a lot of CREE mounted and used simultaneously.

What Are The Differences Between CREE And COB Led Lights?

The major or rather the most obvious difference between the two LEDs is most noticeable in terms of how they appear physically.

The CREE LED lighting system has a larger size and a PCB area that is wider than its COB counterpart.

Both LEDs generate large quantities of heat when they are both being used.

This is evidently due to the technology or mechanism that they define them.

Improper channeling of the heat will considerably reduce the light’s lifespan. By being broader and bigger, CREE can dissipate a higher volume of heat into its environment.

This simply means that it is longer-lasting.

The Quality Of Light Produced

One other difference between the two lighting systems is the light quality that they produce.

Even though they are both high-end lightening solutions, their light quality is not the same, although this may not be obvious to the eye that has not been adequately trained.

The COB packaging uses an integrated style scheme. This entails that it is a light source for an area and can birth a large visual angle.

One other upside is that it is not hard to reduce and change the loss of light refraction with the COB system.

On the other hand, the CREE system consists of many distinct units trapped in the PCB plate. In terms of luminance, this may be advantageous.

In terms of circuit design. COB feature about nine diodes or more.

They also include two contacts and one circuit, irrespective of the number of diodes may differ.

The sole reason for the appearance of COB light as a panel is due to this circuit design being simple. On the other hand, the CREE system looks like a stack of smaller lights.

On the contrary, COB LED light is not suitable for producing lights or bulbs that are color-changing.

This observation results from this system’s one circuit and two contact designs.

Numerous channels for modifications are needed to produce the color-changing outcome.

As a result, in terms of one-color applications, the COB systems are efficient, but the same can’t be said in a more versatile technology.

Another point of difference between both technologies is their energy usage. The COB system features greater heat efficiency and enhanced lumen/watt ratios.

The ceramic substrate and design of the COB system are highly implicated in this.

Prior, long-lasting technology like floodlights and spotlights LED was not the standard. This is because multiple LED sources are needed to give that output type.

Much more recently, COB chips possess the ability to yield lumens of a greater amount while requiring a lesser amount of energy.

This can be seen in all types of bulbs. It has a higher range with about 80 lumens/watt minimum. Its applications can be seen in the point-and-shoot camera or the flash of a mobile phone.

The industry is continuously being flooded with many innovative lighting systems that have revolutionized how we see the world.

Many of these systems include some features that are nice to some people’s reasoning but may mean less to others. The LED systems here are a typical example.