Home / Flowers / Daylilies Deadheading – When and How Should You Do It?

Daylilies Deadheading – When and How Should You Do It?

Many horticulturists pick Daylilies because they easily conform to unfavorable and harsh climates. One thing familiar with daylilies is that they are pretty sturdy and don’t have any severe pests problems. When choosing where to plant them, choose carefully. Daylilies are quite large and can grow as large as three ft in height.

What daylilies need to bloom properly is a warm shelter site. They also require plenty of water and fertile soil for them to thrive.

Even though daylilies can grow in poor soil with less fertilizer, they may not thrive well. In such a case, use an organic soluble fertilizer to improve the ground’s fertility.

Daylilies can produce up to a hundred blooms or more during their season. But the big question now is what to do after the daylilies bloom.

When to Deadhead Daylilies

Gardeners often ask questions like if it’s possible to keep their daylilies thriving.

Well, one way you can genuinely care for your daylilies after it blooms is through deadheading. When you deadhead daylilies, you’re indirectly assisting it to concentrate its energy more on making blooms rather than forming seeds.

Daylilies blooms are beautiful and an excellent choice for landscapes. Because of their minimal maintenance requirement, daylilies have become the most famous and favorite flower amongst gardeners.

But it helps to do a little gardening work now and then to keep them beautiful. In doing so, you need to know when to deadhead the daylilies. Here are three periods when deadheading daylily is essential.

Daylilies are a type of flower that reproduce by sexual reproduction. In other words, daylilies produce seeds. To propagate daylilies, you can either plant its seeds or divide new fans formed by each fan.

Most daylilies do not fertilize themselves, so pollination is a requirement to form fresh blooms. So when there is a transfer of pollen grains from a daylily to another daylily’s pistil, reproduction occurs.

Many gardeners plant daylilies for their flowers and not for their seeds. However, please note that daylily’s flower is a reproductive structure itself. The flower is sometimes called blossom or bloom.

Daylilies flower forms from a modified axis or shoots from an apical meristem of the flower. Daylilies that successfully pollinate form seed pods. We do not aim to produce the seed in this case.

When daylilies produce seeds, they spend their energy, time, and resources developing those seeds rather than forming new flowers. Even though the bloom lasts only a day, thus its name, when the daylilies produce seed pods, it is a perfect time for deadheading. Seed production of daylilies takes away the potential of future flowering.

Deadheading daylilies are all about pruning the seed pod from the plant so it can focus its energy on producing new bloom.

When you notice the pod starts to crack open at the top, it’s a clear indication that it’s forming seeds. And when you peel open the pod, you’d see its shiny black tiny seeds within it. The seed pods are football-shaped and have a three-part seam along the top, which is straightforward to locate.

Another time we should deadhead daylilies is when we want to encourage its growth and bloom. As you already know, daylilies are a flowering plant that produces seeds. Its seeds change from green to brown or yellow as it ripens. It may also interest you to know that it takes between 6 – 8 weeks for the production of viable seeds, although it depends on some variables like the variety of daylily.

The idea of deadheading is the removal or pruning of seed pods and old blooms from the plant as a whole to promote more flower production. As we know, roots in plants are necessary and the primary route for the uptake of nutrients even for daylilies. And the daylily is a type of plant that has only one source of nutrient uptake.

After taking up essential nutrients from the soil, and combining it with photosynthesis, the flower will have all its needs to thrive. But when there is a breach in this balance, the daylily would not bloom or grow as it should.

For example, when the plant is spending its time producing seed, it wouldn’t bloom properly. If the plant also has so many faded leaves, it would obstruct its free flow of nutrients to needed areas in the plants for photosynthesis.

Old blooms should also be removed from the plant to allow the free flow of air, which it needs to grow. When you remove all these things, your daylilies would be healthier. So, to ensure the daylilies bloom and develop well, deadheading is vital.

Another time you need to deadhead daylilies is during late fall or early spring. The simple reason behind deadheading daylilies this period is because daylily is a seasonal flower. By this time, the daylilies would have completed its bloom cycle, making it the perfect time to deadhead. Deadheading is a bit tasking, but after taking the time to do it, it would perform better.

If you’re a seasoned or new gardener and you have a sunny location, with rich, well-drained damp to sandy soil, you’d enjoy planting daylilies. Daylilies require little attention and can grow even in extreme conditions.

Daylilies come in different colors apart from pure white or blue colors. Some daylilies may even come in multiple colors and may produce double blooms. Some varieties of daylilies are fragrance, which attracts butterflies. The flowers of daylilies grow on stalks, while the entire flower stalk is the scape.

So, by deadheading daylilies during late autumn or the beginning of spring, you give it a better chance to bloom next season. You should deadhead daylilies before winter because the plant is going into dormancy. Further deadheading after this period might kill the plant.

How to Deadhead Daylilies 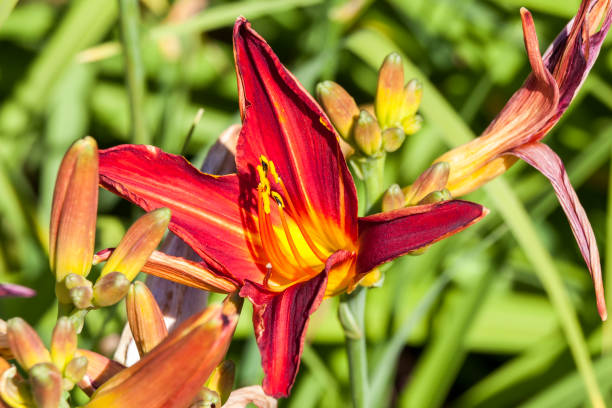 After flowering, daylily will start to wither and becomes very unaesthetic and unattractive. At this point, you should deadhead a daylily to make it look aesthetic. Doing this also encourages a more extended flowering period and also makes it look tidy. You can easily remove spent flowers with your hand.

When the flowers on a single scape bloom, prune it from the stalk of the daylily. You should remove the heads of the daylily’s seed and drained or withered looking leaves as well to make the daylily look healthy and to encourage more bloom.

Now that you know how vital deadheading is to encourage more blooms in daylilies, which is what we all want, we also need to consider how to do it the right way. Surely, deadheading daylilies make them look better and attractive, but doing it right is critical. Here are five ways to deadhead daylilies properly.

When daylilies bloom in a season, do not feel they will become useless. It might take a while, but under proper care, it will blossom again. And you can help it bloom again by leaving its foliage.

Cutting down the daylily’s leaves because you want to keep your garden neat weakens the daylily and reduces its chance of a Taking caution during spring trim comeback. Why? Because the daylily leaves are responsible for photosynthesis and absorption of carbon dioxide – its primary source of carbon.

The carbon and energy daylilies generated during photosynthesis are responsible for the buildup of its root. As soon as daylilies roots are strong enough, they will have a better chance of surviving the winter.

In other words, when you trim off daylilies foliage, it wouldn’t be able to bolster itself which will result in producing weaker roots. The plant will also form a poorer flower next summer if it is not well-developed.

Another way to deadhead daylilies is by removing their flowers. However, we are firmly against you cutting daylilies foliage. However, it is possible to prune the flower stalk of daylilies without affecting the plant.

As soon as daylily’s bloom fades, you can cut it off from the flower stalk. As we mentioned earlier, there may be more than one bloom on a single stem. In a case like this, you should cut only the faded flower from the scape.

But if there is only one bloom on a single stalk, then cut the faded flower down the stem about 3-4 inches very close to the root.

Don’t cut the blooms very close to its roots, as it can pose disease threats to the flower or invite pests. If the stalk is left to keep growing on the plant, it will develop into a viable seed. And this process requires so much energy from the plant. Rather than letting the daylily form blooms, it depletes the roots’ energy.

Another way to deadhead daylilies is by light trimming, which involves trimming damaged leaves. Light trimming is quite tasking but very rewarding to daylilies as it helps them conserve energy. Light trimming also helps make it look more aesthetic. We mentioned earlier that you shouldn’t cut daylily’s leaves; however, cutting diseased and damaged-looking leaves is an exception.

You can trim off these exceptional leaves, but it has to be earlier in the season of daylilies so they can recover before winter. If only about 3-4 inches of the foliage is damaged, you can trim it off. But if it is more than 3-4 inches, trim off the entire foliage close to its root.

The best time for transplanting daylilies is towards the end of summer or at the beginning of autumn, when most of the daylily’s blooms have already faded. Just before you transplant the daylily, ensure you trim the leaves to about 6 or 8 inches long. Doing so makes working with daylilies easy and, at the same time, it leaves enough leaf to produce energy for the roots.

Transplant trimming is a part of deadheading as it helps daylilies produce more bloom next season. After transplanting daylilies, it’s perfectly alright when you notice the leaves dying off. This process of leaf dying off is called the transplant shock. So, the best remedy is just to give the daylily time and intensive care to recover independently.

The shortcoming about trimming newly growing daylilies is that it grows from their center outward. So, transplanting or removing the central leaves that are newly forming will be a risk as it could damage the plant’s crown.

The damage doesn’t end there, as this could also stunt the daylily’s growth. There’s also the risk of exposing its tissues to several pests and diseases. To further add, if you’re planting daylilies in a wet spring area, this cut can put the daylilies at risk of fungal problems.