Is Hydroponics Organic? – The Key Facts

In short: Yes, hydroponics is ogranic – but only if all the guidelines set by the NOP (National Organic Program) are met. Read further for more details.

Over the years, one thing has remained constant as far as hydroponics is concerned – that’s the debate on whether or not it should be considered organic. This, in part, has been necessitated by the growing concern by most of the world’s population, who are now conscious of what they consume. Hence, they want to be assured of their safety.

Research has shown that many diseases that have become a menace in the 21st century emanate from the foods we eat. Crops are being grown with excessive use of inorganic substances mostly contained in fertilizers. This article seeks to go deep into the hydroponic process by thoroughly researching and presenting facts that will enable you to make an informed choice.

Notably, the hydroponic mode of crop production never appeared in the Organic Foods Production Act (O.F.P.A.) of 1990. Later in 2010, the National Organic Standards Board (N.O.S.B.) made a formal recommendation that hydroponic systems be prohibited from obtaining organic certification.

However, the recommendation hasn’t been adopted by the National Organic Program (N.O.P.) nor has it issued the public with any regulations or guidelines on the same.

In a statement issued by Miles McEvoy, an official overseeing the U.S.D.A.’s organic program, “The recommendation did not adequately address the diversity of practices and systems in the industry”.

Hydroponics involves the cultivation of crops without soil. Instead, water is used as the primary medium from where the plant roots absorb nutrients. The water, therefore, acts as a solvent that contains all the nutrients required to support and promote plants/ crops growth.

Notably, the roots support themselves inside the water by mediums such as clay pellets, peat moss, or vermiculite – just to mention a few. It’s, therefore, a controlled environment where minerals and other requirements by the plant such as light are supplied as and when required and in the right quantities.

On the other hand, organic farming involves crop and/or livestock production while ensuring zero use of synthetic-based fertilizers and pesticides. This, in essence, protects the environment by conserving energy and increases soil health.

Conventionally, plants were believed to survive in the presence of a combination of air, water, and soil –and not one in the exception of the other. However, so much has changed including soil degradation, lack of enough rainfall as well as air pollution posing a challenge for ample food production worldwide. As a result, several ways to grow crops and rear livestock have been invented to ensure food security now and in the future.

Of these, hydroponics has proven to be a more reliable, affordable and predictable mode of crop production. This is because it’s a controlled system where plants are fed with the right amounts of nutrients that they require and at the right time. As such, the chances of crop failure are highly reduced while increasing productivity.

Have you heard of the biofilter in hydroponics?

In the U.S., some hydroponic farms using Biofiltration – a pollution control technique using bioreactor containing living material to capture and biologically degrade pollutants can be certified as organic.

This is because it processes wastewater and captures harmful chemicals or silt from the solution and microbiotic oxidation of contaminants in the air.

They are classified into six basic types as stated hereunder. However, there are hundreds of variations on these basic types but of importance to note is that all hydroponic methods are a variation or combination of these;

It’s the easiest of the six. As the name suggests, the system relies on the wicking process to feed the plants with the water-based nutrient solution. Due to its simplicity, it’s the most recommended for starters as it also requires less capital.

This involves the suspension of the plant roots, usually with the use of floating rafts in a solution of nutrient-rich, oxygenated water.

In this method, constant flooding and draining of the grow bed at intervals is repeated daily. Usually, a timer is used to regulate the process.

It’s the most commonly used method by both small and commercial farms due to its effectiveness and easy installation as well as maintenance. Besides, it requires less amount of water.

Often used to grow smaller and fast-growing plants, N.F.T. involves the use of a watertight pump to deliver water to the growing plants.

Highlighting the positive Effects of hydroponics on the environment 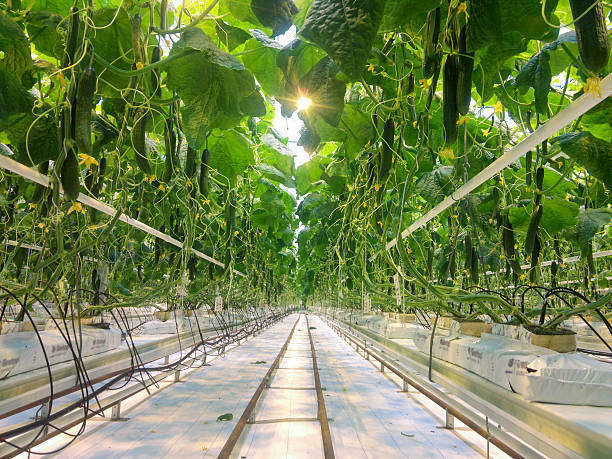 As the organic debate continues, there seems to be far much more similarities than differences between organic farming and hydroponics than is usually highlighted – especially by those against the organic certification of hydroponics.

For instance, organic farming aims at protecting the environment by taking care of the soil. Similarly, hydroponics is sustainable and eco-friendly in its ways. Some of these include:

The consumption of water by hydroponics is far much less as compared to the conventional cultivation on land. This is simply because the circulation area is smaller in the controlled system and very minimal will be lost by evaporation.

Also it’s stored in a central tank hence the excess is recycled within the system. On the other hand, plant roots compete for water with the soil while the rest is absorbed even deeper into the ground.

Going the hydroponic way allows utilization of otherwise unproductive land such as desserts and urban centers. This means that agriculture has been made possible even in areas that could have otherwise not supported plant growth due to harsh weather conditions.

Decreases the use of fossil fuel

Larger companies practicing hydroponics are capable of setting up their systems closer to the consumers, for example, near the market places and retail stores hence eliminating the need to transport their produce. Besides, the reduced use of machinery to harvest the crops reduces carbon emissions.

Limited to no use of chemicals

Weeds, pest, and diseases thrive well in the presence of soil; hence it’s inevitable to use pesticides and herbicides – which leave a long residual effect, to control them.

As such, hydroponics plants are less likely to be infested by menacing pests and diseases. This minimizes the use of herbicides and pesticides hence lowering the cost of production while increasing nutritional value.

Although there are several organic-certified hydroponic systems in the market, a larger percentage of plants grown hydroponically remain uncertified. This is because of the existence of certain requirements set by the National Organic Program that they have to meet.

These regulations exist to protect the environment, as well as its inhabitants – including humans hence the bodies, ensure that all the practices carried out on the farms are within their measures to foster the protection of natural resources, biodiversity conservation, and exclusive use of approved substances.

That said, the bar set by N.O.P. and other regulating bodies such as The National Organic Standards Board (N.O.S.B.) is quite high. There have been several debates as to whether crops grown hydroponically qualify to be classified as organic or not.

Agricultural production has to comply with the U.S. organic laws and regulations and must also be certified by a U.S.D.A. accredited certifying agent – such as the ones stated above, to attain a 100% organic label.

It’s also important to note that later definitions of the term organic do not put too much emphasis on the presence of soil.

The regulations are quite a number but you may view them here.

The organic label & its significance

It’s undeniably evident that the organic debate will persist for some years to come. This is in part because the regulating bodies already put in place are yet to give a distinctive stand on whether hydroponics is organic or not. On the other hand, some officers from the certifying bodies are certifying hydroponics as organic when others are not yet they are guided by the same guidelines.

You see, consumers hold with high regard all food products bearing the U.S.D.A. organic label for the sole reason that they can be assured of their safety. This is in as much as healthy living is concerned; consumers believe that “organic” labels on foodstuff signify that they are chemical-free.

Notably, the label is quite expensive to attain. Some several rules and regulations must be adhered to. In the same breath, organic products are also priced higher than other items on the shelves – signifying their importance. Therefore, an organic label indicates that a product has been certified against specific organic standards hence, it bears the name of the certification body and the standards with which it complies.

The main difference between organic and hydroponic fertilizers

Did you know that the only difference between organic and hydroponic fertilizers is that the later contains proper amounts of all the essential micro-nutrients, unlike fertilizers intended for use in soil gardens? Well, now you do. This explains why crops produced hydroponically appear and are indeed healthier than their conventionally grown counterparts.

They grow faster, uniformly and produce higher yields hence mostly preferred by commercial farmers. In addition, research has proven that vitamin content is 50% more in hydroponically grown plants as compared to conventional ones.

Bearing in mind all the facts stated in this article, our initial question still begs for an answer. As such, our precise response to whether hydroponics is organic is yes – but only if all the guidelines set by the N.O.P. are met.

In regards to the contentious issue on the fact that soil is not used when growing crops hydroponically, a nutrient film technique system producing plant nutrients by microbial activity stands in the gap and completes the “equation” since that meets the set organic standards.

Moreover, the “soilless or not” basis of discussion might not be strong enough since the risk of pests and weeds is rampant in soil-based agriculture, necessitating the use of pesticides and herbicides which in return pose the danger of compromising food safety for human consumption.

There is no nutritional difference between plants grown in soil and those in water because, from a plant science viewpoint, nutrients have to dissolve in water first before they can later be absorbed by the plants. The micronutrients used in the solution are also organically sourced.

Furthermore, it’s yet to be scientifically proven whether or not organic products contain more nutrients than those grown conventionally. Until then, hydroponics has still got room for improvement and innovation.

Finally, with the increased population which is disproportional to the available land for crop production to feed it, hydroponics seems to be the future of agriculture.