Is Spraying Microgreens With Hydrogen Peroxide A Good Idea? 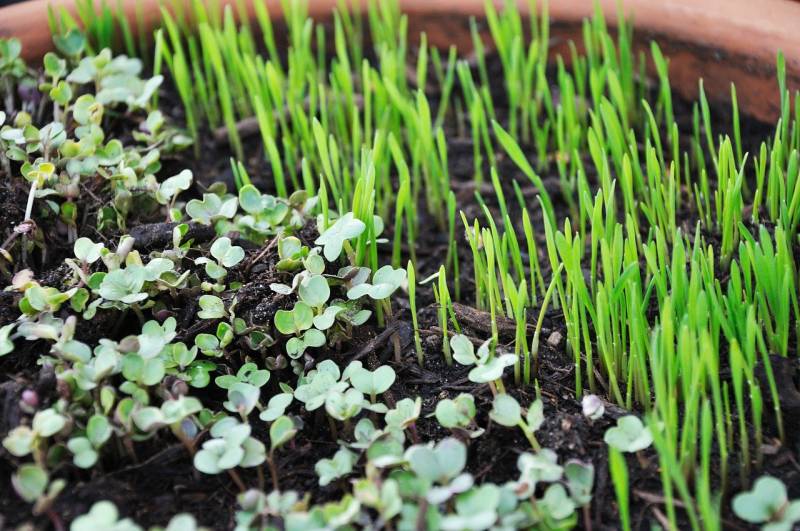 Hydrogen Peroxide accelerates development, protects plants, kills germs; this is just a shortlist of how peroxide can help flowers.

When growth due to decreased lighting, waterlogging, or, conversely, poor watering, stops, flower growers use peroxide as an affordable way to revive plants.

Almost everything in large quantities can be harmful, and use in the garden is no exception. It is not for nothing that it is said: the dose makes the poison!

When used in the garden for microgreens, it is usually diluted, which makes it particularly safe to use.

So the answer to the question is no, provided it is diluted accordingly!

For microgreens with root rot or fungal infections, use 1 tablespoon per cup of water. You can also store the solution for further use. But keep them in a cool, dark place, as exposure to light affects their effectiveness.

In the case of root rot, you should water close to the plants, and if the leaves are fungal, you can spray the leaves with a spray bottle.

Pre-treatment of seeds with hydrogen peroxide:

Old seeds and seeds with hard shells are particularly susceptible to their ability to absorb oxygen. It has been observed that this negatively affects the germination rate. Pathogens transmitted by seeds are also increasingly causing losses in the germination rate, which can be improved with pre-treatment.

For microgreens, it is enough to use 3% hydrogen peroxide, diluting with water. Other existing options are used in the technical and food industries.

How to prepare a solution for spraying plants:

Pour into a bottle or spray bottle and spray on the leaf or stems of the plant. Apply once a week. As suggested above. For seed treatment, peroxide can be diluted 1: 1.

Use Of Hydrogen Peroxide To Water Seedlings

Hydrogen peroxide in crop production is used as a dressing for seedlings and various plants. This is mainly because hydrogen peroxide dissolved in an aqueous medium resembles rain or meltwater in its composition.

The chemical formula for hydrogen peroxide is H2O2. It contains atomic oxygen, which has the properties of oxidizing the soil and saturating it, as well as plant cells with oxygen.

Besides, the destruction of pathogenic bacteria occurs.

The Effect Of Hydrogen Peroxide On Seedlings

This chemical is also used to water the seedlings of all common micro vegetables. It should be noted that soon after watering, active growth begins, its leaves develop, which becomes noticeable in comparison with plants for which ordinary water is used for irrigation. Plants are grown with hydrogen peroxide give a good harvest.

H2O2 is, in fact, a natural pesticide, fungicide, soil aerator, strengthens the root system, and stimulates growth. The properties of hydrogen peroxide can be useful for any gardening, even for the garden on the windowsill.

Hydrogen Peroxide For Seeds And Seedlings

The seeds will germinate faster, and the root system will be stronger and more branched if you soak the seeds in a solution of hydrogen peroxide: 30 drops of 3% peroxide in a glass of water. There are recipes to soak for 30 minutes at 3% without dilution. Hydrogen peroxide quickly softens the seed coat and kills pathogens located on the seed surface.

The seedlings are watered with a solution of the same concentration to develop and strengthen the root system of the plant. Irrigation with H2O2 can be systematic, but not more than once a week.

Hydrogen peroxide keeps plant roots healthy. The additional aeration of the soil helps the roots of the plants to absorb micro and macro elements.

The released oxygen “eats” dead roots and does not allow pathogenic bacteria to multiply. Add a tablespoon of hydrogen peroxide per liter of water and water the plants once a week. It is not necessary to water the leaves with this solution as a fertilizer.

Since peroxide is not just 3%, a dilution chart of its various concentrations can help.

The mixture must be prepared immediately before use. Water the leaves and stems of microgreens to get rid of aphids, scale insects, and mealybugs.

The oxidizing properties of oxygen in peroxide work against the blackleg and root rot. Root rot develops per day if the microgreen is flooded and the roots are in stagnant water with a low level of dissolved oxygen: microgreens infected with water with an abundant solution of phosphorous fertilizer + 3% peroxide (2 tablespoons of H2O2 per liter of fertilizer solution) 2 times a week.

The active release of oxygen displaces the anaerobic conditions in the soil; even 2-3 irrigations may be enough to cure. Let the water drain out of the pot well along with the infection, don’t let the pot sit in a pan full of dead water.

Everyone wants to grow healthy and strong seedlings. There are many ways to grow and fertilize seedlings. Today we will discuss another method in which hydrogen peroxide is used to grow seedlings.

Hydrogen peroxide is known for its beneficial effects on living organisms. It is widely used in an official form and popular medicine. It turns out that with their help, it is possible to strengthen and accelerate the growth of seedlings.

Microgreens in the wild eat rain or meltwater, which has a beneficial effect on their growth and development. In our conditions, it isn’t easy to find clean melt and rainwater. And then hydrogen peroxide comes to the rescue.

The fact is that a solution of water with hydrogen peroxide is similar in composition and properties to meltwater or rain.

According to its chemical formula, H2O2, hydrogen peroxide contains atomic oxygen, which oxidizes the soil and kills all pathogenic and harmful bacteria and saturates soil cells and plants with oxygen.

How Does Hydrogen Peroxide Work For Microgreens?

H2O2 is externally indistinguishable from water. Like water, hydrogen peroxide consists of oxygen and hydrogen, but it has an extra oxygen atom (like ozone-enriched rain during a thunderstorm). H2O2 is an unstable molecule that rapidly loses an oxygen atom.

This atom acts as an oxidizing agent that destroys the tissues of pests: many pathogens and spores are killed by free oxygen. Besides, the released oxygen works as a soil aerator. Due to the good oxidizing effect, gardeners use hydrogen peroxide to improve the quality of irrigation water: chlorine quickly disappears from tap water, pesticides, and organic compounds oxidize.

Rainwater also contains H2O2, and it is part of the earth’s “cleaning system”. The unstable ozone O3 easily adheres to water molecules and decomposes just as easily, various oxidizing pollutions in the atmosphere in the process.

Hydrogen peroxide is considered an affordable and effective tool, thanks to which microgreens receive trace elements and substances necessary for their normal growth and flowering.

You can buy the drug at any pharmacy, and for the preparation of solutions does not require special skills.

Subject to the recommended dosages when using the drug, you may notice a positive result after a few days. Hydrogen peroxide is used by all the agricultural sectors of the world, which confirms its effectiveness.