Laelia – How to Plant & Care

Historically, plants were grown by humans for a variety of purposes. These include but are not limited to shelter, food, and medicinal purposes. The history of ornamental horticulture began at 4,000 years of human civilization. These plants were explicitly grown for decorative purposes and visual attractions.

The plant parts such as leaves, stems, petals, and bark independently create aesthetic perspectives and increase the overall beauty. Traditionally, Koreans are involved in ornamental gardening because they believe that ornamental plants have their role in the mind’s status, hence everything.

Do you know that positivity retains your physical and mental health? For years, researchers have been probing and reporting about the phenomena that benefit human psychology and health.

Allow me to mention the “giant” of the field, Dr. Bruce Lipton’s book. The book “Biology and Belief” describes the importance of human perception of the environment.

These chemical emotions activate metabolic pathways and the immune system. Moreover, psychologists approve of the importance of ornamental plants in health improvement in the light of several pieces of research done so far.

Needless to say that the adoption and the cultivation rate of these ornamental plants are significantly increasing with time. Below, I will do a comprehensive analysis of Laelia plants and the fame they inhabit. 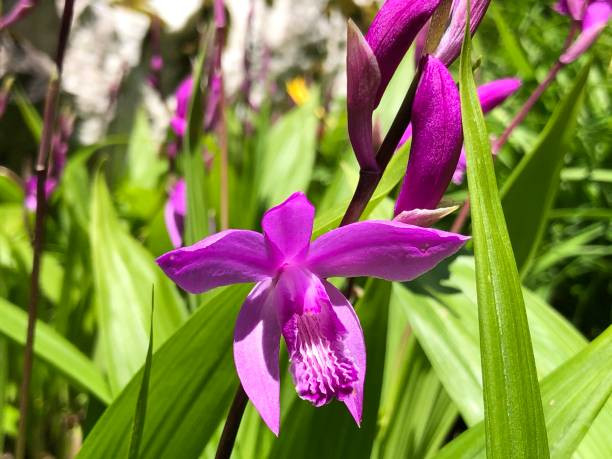 Laelia plants, delicate in looks but dependable in traits, are a genus of twenty-five species with stunningly colored flowers. The taxonomic classification is a genus of Orchids (family Orchidaceae). Laelia genus was established back in 1831 by John Lindley.

He listed two Laelia species in his work ‘’The Genera and Species of Orchidaceous plants’’. The orchid family mainly contains the species of flowering plants that have a cosmopolitan distribution.

Orchid’s fame is inevitable as it contains plants of delight with attractive looks, stunning flowers, and fragrance. Same as Laelias.

Besides their natural beauty, Laelias were crossed readily with other species such as Cattleya, Brassavola, and Sophronitis to develop customized hybrid and beautiful orchids.

The beauty characteristics of the Laelias are well-known among ornamental plant enthusiasts. The attractive, stunningly colored flowers with a showy and bright appearance make them prominent among other orchids.

Generally, apart from these eye-catching characteristics, plant buyers also take into account the fact of the extent of care a plant needs.

And Laelias do not disappoint them here too because they are durable, dependable and easy to grow plants. Laelias can be grown and thrived even on the window-sill upon a bit of care.

Laelias’ name change confusion is widespread for the information seekers about these beautiful species. The scientific information you have obtained and buying information that a trader will tell you maybe sometimes contradictory.

Because the recent name changes and taxonomic re-classification of Laelias have subtracted the famous Brazilian Laelias from the genus.

But for the flower traders, this was just like a piece of news as they usually prefer the traditional classification. In actuality, few species of Mexican Laelias have remained in the genus. In the horticultural trade, they are abbreviated as L.

Ongoing gene studies were the reason which made this change happen. Laelias were first included in the Sophronitis genus in 2006. Furthermore, they were transferred to the Cattleya genus in 2008. The very famous Cattleya purpurata was formerly known as Laelia purpurata.

This change is ongoing and many hybrids were also renamed recently, leaving behind a few Mexican origin species such as Laelia rubescens, Laelia anceps, and Laelia orchids. Interestingly, the Laelia genus has also imported some species from the genus Schomburgkia.

Moreover, this notion has more weight for the Cattleyas. Traditionally, Laelias were distinguished from Cattleyas based on the pollinia they contain.

Below you will find valuable information about planting laelias and the guidance related to the care Laelias demands.

Before getting into detail and answering this query about growth and care for the Laelias, it is essential to know about the plant’s natural ecology. This information gives us an insight into the plant’s preference for conditions to grow and thrive.

The example of Mexican Laelias is mostly mountain inhabitants (found in forests too) widely distributed in the country’s western ranges. The famous Laelia rubescens and Laelia anceps grow at both sides of the Isthmus of Tehuantepec.

Being epiphytic, light and thick Oak’s forests from sea level to high up in the mountains are preferred by Laelias to grow on. Few may also grow on rocks as lithophytes. The goal is to obtain suitable conditions such as humid air and much light.

Undoubtedly Mexican Laelias can be called xerophytic epiphytes due to their adaptations to dry climates. Interestingly they are absent in the trunk areas closer to the ground, with their presence a meter or more above the ground level.

Several Laelias (grow above 2000 meter elevation) can tolerate short frosts, making them adapt to outdoor cultivation in Mexico. They can also be grown in subtropical areas with cool summers and other temperates.

The climate of Mexico:

In Mexico, it is usually 25-30 degrees Celsius at noon in warm and dry springs with no fog and rain. At night temperature can drop to 5-degree Celsius.

Maritime winds change the temperature of Mexico in early June and sometimes by the end of May, making the days cloudy and frequent fogs. Moreover, Heavy rainfall happens in the afternoon from June to October owing to these humid winds. The temperature range in this period is 10-24 degrees Celsius.

Early fall and summer are thriving seasons for Laelias. From late October to November, the climate changes to dry, sunny, warm and sometimes cool temperatures. Although humid winds last at this time of the year, atmospheric humidity remains high. It is 0-5 degrees Celsius at night in the late fall.

Prolong light showers and fog producing cool, humid winds occur in December and early January in Mexico. Normally, Laelias that grow below this 2000 meter elevation experience the same preliminary climate patterns except Laelia aurea and Laelia rubescens, which inhabit hot lowlands because they prefer plenty of sunlight and trees’ shade.

How to grow and flourish Laelia orchids:

The weather conditions of Mexico are explanatory of growing conditions for Mexican Laelias. Below you will find more simplified information, which can be useful for Laelia orchid’s admirers.

As mentioned above, it may be useful to research the origin of Laelia orchids. If your Laelia has a high elevation origin, plenty of sunshine, dry air, and cool conditions will make them thrive.

Dry and cool winters, while moisture and warm temperature in summers will be appreciated by Laelias, in case they came from the rainforests.

Decreasing the temperature considerably up to 5 to 6 degrees Celsius at night would help your Laelias to thrive, as this normal temperature drop happens at their origin too.

Recalling the orchid’s ecology and origin will provide an insight into its humidity and water preference. This could be specific for Laelia’s type. Regarding Laelias of Mexican origin, high humidity is not their special requirement. During growth seasons, they need plenty of hydration.

The drainage should be maintained to prevent their roots from rotting. At the end of the growing season, the humidity and hydration should be reduced. Also, the provision of cooler temperatures is good at this stage.

The ecological fact that Laelias prefer host trees (oaks) to grow as epiphytes, where they are saved from direct sunlight but have high light availability makes the preferred condition clear.

One should save them from direct sunlight while allowing the light to reach the plants.

Fertilizer is not required at high levels by these Laelia orchids. However, it is suggested to feed them nitrogen-rich fertilizer during spring (with plenty of water) to mid of summer, followed by the addition of phosphate-rich fertilizer in the late summer.

Furthermore, avoid providing watering and humidity while the growing season ends to make the conditions suitable for orchids to bloom. The desirable characteristic, such as flowering, happen during winter or spring.

Laelias prefer the potting system with good drainage. They do not like to remain wet for long, although hydration is beneficial. Experts have derived ways to create the potting scaffold, keeping in mind the drainage science of Laelias. Being xerophytic epiphytes, prolonged water retention can make Laelias lose their roots.

Charcoal added to fir bark can provide better water drainage, making this a good option as a potting medium. You may use any other inorganic material for the purpose, keeping in mind your goal. Clay pellets and pine barks are other great options forwarded by growing experts.

The potting mix should be changed upon getting too old. When the new roots begin to appear is a suitable time for potting. If not, roots will not get well-established, ultimately affecting the flowering, which is unfortunate for beauty lovers.

Providing the pre-mentioned conditions (such as adequate potting, watering and climate) is the base of obtaining desirable goals from these orchids.

Unlike other ornamental plants, Laelias do not demand a lot of care, but general raising practices are necessary. Aseptic conditions (especially while deleting the dead leaves, using ethanol to clean the scissors), good quality fertilizer, and clean water may benefit flourishing.

Laelias may come across certain diseases. Leaf necrosis and black streaks are common among them. The cymbidium mosaic virus infects the plants in this disease.

In natural habitats, this disease is less seen. The vector for this virus is unknown, but theoretically, pruning is thought to be a source of virus transfer.

That is why it is suggested to use aseptic equipment while pruning. Dead tissue streaks and brownish to black spots may develop on both leave sides. These leave dry and age quickly. This may cause flower numbers to decrease.

Another research published in the journal Tropical Plant Pathology has shown that 39 fungal strains were isolated from Laelia speciosa, Laelia rubescens and Laelia autumnalis species from Morelia city in Mexico.

A. fumigatus and F. proliferatum were the two most common pathogens found. In contrast, F. solani was the most aggressive fungus. The fungicide benomyl and thiabendazole were beneficial in the growth inhibition of various fungi present.

Other undesirable conditions are also seen in Laelias, such as slow leaves’ growth and shriveling due to inadequate watering.