Home / How To Guide / Lawn Mower Is Bogging Down – Why? How To Fix?

Lawn Mower Is Bogging Down – Why? How To Fix?

A mower bogging down is considered an issue that arises when cutting grass in a yard or on a plantation where one has grown grass for commercial purposes.

While it often looks serious, the solution is usually quite easy.

It might only need minor repairs, specific maintenance criteria, and the proper ways to use the lawnmower. 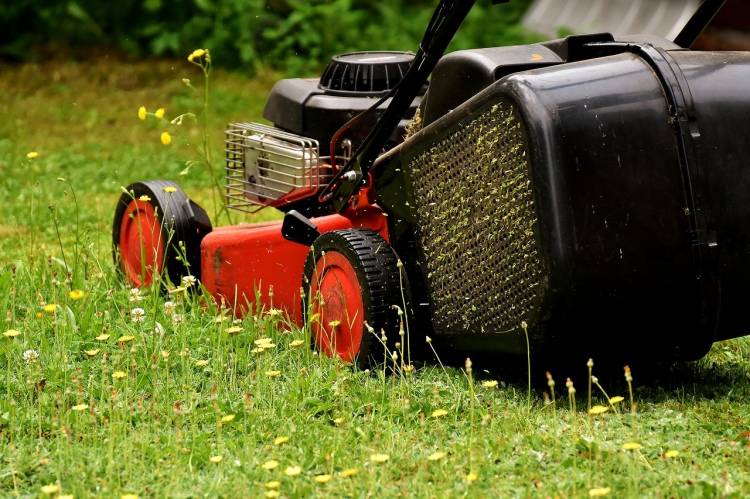 Many people have experienced bogging down, especially when going uphill.

Most of the time, a mower can bog down if it has issues with the engine’s power system, whereby the blades flop to cut the grass.

This article will show you Some common Causes And Solutions To Bogging Down;

1. The Engine May Have Overheated.

This is mainly a result of grass clippings that are formed during the mowing process as they may lodge between the cooling fins found in combustion engines.

The lodging of the dust and grass clippings causes an obstruction and prevents generated warmth evasion of engines.

This leads to the engine becoming too hot and overheating, thus having a problem working as required.

Due to the strain that the mower undergoes while pushing through the grass, it bogs down and might even die.

The right mixture of air and gasoline is essential for a small engine to run smoothly.

If the engine happens to have air leaks, it will suck in more air leading to a disruption in the air to gasoline ratio.

The motor sometimes depicts massive interference with fuel fusion amounts, causing bogging down of the mower.

These air leaks are caused by small gaps between components and are known to widen as the mower moves and engines get heated up.

3. The Spark Plug May Have Problems.

Spark plugs are known to happen in instances in which it is firing electrodes.

These two electrodes must have a gap set between them so the spark can burn the fusion that is needed to motorize the mower.

Bogging down occurs when the gap is too wide; thus, a lawnmower loses its efficiency and effectiveness.

A damaged plug may also be another cause of this spark plug problem.

Long mowing hours, which cause carbon build-up, is yet another reason that can cause a spark plug in a lawn mower.

4. The Engine May Have Compression Issues.

As it is well known, engines have valves that need clearances once in a while.

The valves are expected to close tightly, which enables the mower to operate well.

The valves open, and this prevents the cases of bogging down from happening.

5. Problems On The Carburetors Sticky Choke

A lawnmower consists of a carburetor that has many components.

The use of a sticky choke provides the engine with a gasoline mixture to start it up.

However, there are some guidelines on how the choke operates.

If the choke sticks shut, this will lead to the engine running poorly due to bogging down and hence has to be controlled.

6. Mowing On A Hilly Area May Be An Issue.

Hilly areas are usually associated with bumpiness, which is true.

Mowers sometimes tend to hesitate or die when one hits a bump. For example, this could be a possible reason for bogging in a hard and bumpy yard.

The dirt and corrosion in such areas may also make the mower lose power as it’s going uphill.

The blades could also slow down as it gets coated by the grass or other build-up in that area, making it more difficult for the motor to turn them.

This may not be faced when mowing on level ground as it is on the counterpart uphill or slopes.

7. Cutting Thick Grass May Also Cause A Mower To Bog Down.

For a relatively old lawnmower, some rough times are expected while running it.

However, a smooth run during the operation is usually expected from a newly purchased mower.

This might be due to some lousy engine parts or insufficient fuel making it to the air mixtures.

Excessive dirt and grass can also clog the air filter system or the cooling fins, leading to power loss and hence bogging down the mower under load.

The fuel system also gets clogged with excessive dirt.

As much as these bogging-down problems may occur, the solutions exceed the challenges.

Thus, maintaining and constantly checking mowers will keep mowers in excellent condition for a longer period of time, even during mowing.

In the case of total failure, however, calling a professional to solve it would be the right step to avoid creating more damage than there was already.