Home / How To Guide / My Weed Wacker Bogs Down – Troubleshooting Guide

Getting quality weed wacker is crucial if you want a carefully trimmed lawn. However, you should also be ready to front the challenges of using a weed wacker.

Because it doesn’t matter whether your weed wacker is high quality, it is only natural for weed whackers to bog down occasionally. 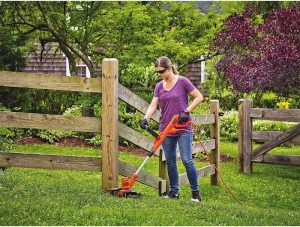 Therefore, as you use your weed eater to cut grass, ensure you are familiar with some signs a bogged-down weed wacker will display.

Whenever your weed wacker stops working abruptly, the first thing to do shouldn’t be to rush to the mechanic.

Instead, you should examine it and find out what the problem is. Most weed wacker problems are DIY and straightforward to fix.

For instance, sometimes your machine might stall because it is switched off, lacks fuel, disconnected extension cord, or has a damaged gasket.

This post hints at some common causes of a weed wacker bogging down and how to fix them in simple DIY steps. Let’s get started!

Check the fuel level in the tank to determine whether the lack of fuel is causing your machine to bog down.

It is essential always to check and ensure that you have enough fuel before cutting grass.

Besides having insufficient fuel, using old fuel can also cause the machine to bog down.

This is because such fuel moves unstably via the engine’s carburetor and prevents it from starting.

Another scenario where the weed eater may fail to run is when the engine is over-flooded with fuel. In such a case, you will have to eliminate the excess fuel for the weed wacker to run smoothly.

If you check and find that you’ve enough fuel, the next step is to inspect the fuel tubes.

The fuel tubes may sometimes be damaged or disconnected, preventing the engine from getting the much-needed energy for smooth operation.

When filling fuel in your machine, ensure that gasoline and oil are adequately mixed, which can also cause the weed whacker to bog down.

Problems caused by fuel can be handled easily. So, you don’t need to acquire the services of a professional to get your machine running again.

You may face one of these problems if you have an electrical-powered weed eater. However, electrical issues don’t apply to gasoline-powered weed whackers.

The most common electrical problem is a poorly connected extension cord.

If your weed wacker is not running or stops abruptly, you should check whether it is plugged in properly.

Another problem may be with the fuse or circuit breaker where the machine is connected.

Check this before you make any other conclusion.

Additionally, you need to select a weed wacker with a slightly long extension cord.

This will prevent you from stretching it and changing it from one electrical outlet to another.

The engine is the central part of the weed wacker. For this reason, there are a variety of issues that can cause the engine to fail.

Some include a spoiled electrical system, low fuel level, and a dirty filter.

Finding out which part of the engine has a problem is quite challenging.

Therefore, you may need a professional, or you can turn on the engine and try to figure out the problem.

If your engine has low fuel, then you can add fuel.

But if it has a spoiled electrical system, you will need a professional to handle it. Don’t take the risk as you may cause further damage.

It is easier to detect a spark plug problem, unlike other weed wacker problems that we’ve looked at.

The engine won’t respond or produce a sound if you’ve got a spark plug issue.

A dirty spark plug will fail to fire and start the air/fuel mixture that starts the engine. This is also known as misfiring.

Additionally, you can know if your weed eater spark plug is bad when it starts hard.

At first, you may think it is because of the low fuel, but the issue may persist even after adding fuel.

If you have a dirty or fouled spark plug, you should clean it and see if it works.

If it doesn’t work, replace it with a new spark plug.

A dirty carburetor can also cause issues for your weed wacker.

Since fuel lines, gaskets, and air filters are connected to the carburetor, you need to ensure that it is clean and functioning well.

Also, if the string trimmer is not used for long, it is bound to fail to start.

If that’s the case, you should buy a new carburetor and replace the old or outdated one.

A damaged carburetor may also cause the engine to choke or run rough. To get your carburetor working again, you should repair or replace it with a new one.

A weed wacker’s gasket helps to seal parts, thus, sealing off air and fluids from going into places they are not allowed to.

As a result, if the gasket is damaged, it will pull excess air into the engine, leading to an improper fuel/air mixture.

When this happens, there will be a loss in power, and the weed wacker will bog down.

To know if the string trimmer’s gasket is damaged, you must disassemble the air filter and fuel line.

Afterward, you can check the state of the gasket.

If there is a leakage or tear, you must clean it and replace it with a new one.

Unlike other parts you can repair, you can only use a gasket once. So, if it tears or gets damaged, your only option is to buy a new one.

The air filter can also cause your string trimmer to bog down. However, this part is easier to fix, and you don’t need professional help.

The weed wacker’s air filter may cause the machine to bog down due to excessive air being let into the engine or dirt.

Excessive air enters the engine if the air filter is wide open. At first, it will make the engine choke and then stall.

On the other hand, a dirty air filter may become clogged and hinder airflow to the engine.

If you face one of the above challenges, you must install the air filter properly. But if the problem persists, you will have to replace the old air filter with a new one.

If you have inspected all the other parts discussed and your weed wacker isn’t starting, you should check the screws.

The weed wacker typically comes with low and high screws.

When these screws are poorly installed, your machine is bound to have issues such as bogging down.

Therefore, you must examine them and ensure they are appropriately positioned.

The best way to install the screws is by adjusting them in opposite directions.

After setting them, you can try turning on the weed eater and see if it works properly.

It is essential to follow the manufacturer’s manual to avoid such issues. And if unsure of how to install the screws, get professional assistance.

For those using a gasoline weed wacker, it is essential to mix the right gas and oil ratios.

Some people mix a lot of gas with little oil. That’s wrong and may cause the weed wacker to stall.

Instead, you should ensure that you follow the manufacturer’s recommended ratios.

Most manuals recommend mixing 50:1, while others 32:1. If you mix the gas and oil well, you will have nothing to worry about.

Regular maintenance of these tools is essential if you want your tools to work efficiently for an extended period.

A weed wacker is vital for people who want to keep their lawns lush and beautiful.

However, like any other tool, it develops problems after some use. For this reason, it is crucial always to ensure your weed wacker is in top form.

After highlighting the possible reasons why your machine might bog down, you should be able to identify and fix your weed wacker’s problems.

Most problems are DIY, while a few need professional help.

Ultimately, the best way to take care of your weed eater is by maintaining it regularly.

Also, use it correctly to avoid exerting pressure on its parts, which may cause it to stall.