Home / Flowers / Rhododendron vs. Azalea – What Are The Differences?

Rhododendron vs. Azalea – What Are The Differences?

Most landscape gardeners are experts in planting and maintaining azaleas and rhododendrons. These shrubs are long-time favorites with both experts and amateur garden owners.

There abundant and bright flowers light up any space and for this reason alone have a place in many cultures. In Asia, for example, countless azalea festivals celebrate the flower when they are at their most exuberant bloom.

In the United States, the rhododendron is the symbolic flower for Washington state. There are few gardens along the Mississippi River that are not adorned with either azaleas or a rhododendron bush.

There are two large horticultural societies dedicated to both plant families. Their flowers are seen as the symbol of spring with their bell-like shapes and various bright colors in pink, yellow, blue, and lilac.

When studied up close, the structure of the flower is fascinating, but few people can tell the difference between the shrub. The flower structure is as follows:

While both azaleas and rhododendrons are favorites and widely known, their similarities make it hard for non-experts to identify between them.

In this article, we will discuss the history, differences, and symbolism between each flower in the hopes of helping the home gardener to better choose, plant, and care for their shrubbery.

Both names have their origin in the 18th Century in the world of the father of classification, Carl Linnaeus. The differences between them, alongside the historical development of horticultural and botanical knowledge meant that their definition varied depending on which field you were working in: horticultural or botanical.

Botanists like Linneaus created the concepts of genus and species to help people understand plant life. However, plants do not fit neatly into man-made boundaries. Before Linneaus time azaleas, mountain laurel, and rhododendrons were all referred to with the long name of a low-growing rose tree.

This remained the loss classification until 1735, when Linnea’s named the Azalea a separate genus in his first book, Systema Naturae. The Azalea genus became more specific in 1753 when Linnea’s added 6 species to it, including evergreen and deciduous azaleas.

It was in 1753 in his book Species Plantarum that he first classified the rhododendrons and into this genus. He places three flowers previously of the azalea family:

The number of states was what he saw as the defining characteristics distinguishing azaleas from rhododendrons, with azaleas having 5 and rhododendrons having 10.

In reality, this classification is relatively recent and most gardeners and horticulturists have continued referring to them with their common name to avoid confusion by referring to the shared genus.

In reality, they should be two separate genera, or the rhododendrons should have been subsumed into the azalea genus. More than opposites, these two large groups of flowers are related to each other in their typology, particularly that of being a shrubbery with flowers of a variety of bright colors growing on them.

The large diversity in the rhododendron species calls into question their classification into one species, let alone into the same genus as azaleas.

In this sense, the official species classification that separates deciduous azaleas from rhododendrons is less accurate and could be changed. The problem lies in the very large and diverse group of rhododendrons more than in the fairly homogenous azalea group.

Rhododendrons, unlike azaleas, are restricted to the northern hemisphere. Some plants will only grow a few inches, while some can be as tall as 27 meters. Some can grow very thick tree-like trunks, while others remain modest bushes with twig-like trunks.

While the larger ones are mostly evergreen, some of the species are deciduous and in some cases, rhododendrons can have both types of leaves on one trunk. These are called semi-deciduous and are a product of a plant being moved to a colder climate and the range of hardiness increases.

The leaves themselves can range widely from an inch to almost three feet. They can be thin or thick with smooth or rough surfaces. Some can survive arctic conditions and produce seeds for the summer later in the year. There is even one type of rhododendron that can survive as a desert plant.

Such diversity calls into question the very classification of all of them as rhododendron but their similarities of leave consistency, flower stamen, and DNA allows botanists to maintain the current classifications in genus and species. The large breath of rhododendrons is the best argument in favor of going against tradition and classifying azaleas under the rhododendron genus rather than merging rhododendron into the azalea genus.

Are they really opposites?

Both plants are native to Europe, North American, and Asia. They can be either deciduous or evergreen, which means perennial, or they may change their leaves depending on the dominant climate.

Their persistence is due to a prolonged period of hybridization, which has led to mixing characteristics between azaleas and rhododendrons, making their distinction harder than it already was in their natural, non-hybridized form.

How to distinguish an Azalea from a Rhododendron?

The connection with the rhododendron gives azaleas their volume, but unlike other rhododendrons, they are one stem flower. Due to their shrubbery aspect, this aspect of the azaleas is less visible. Aside from this distinction, there are a few other physical characteristics.

Starting with the leaves, azaleas, unlike Rhododendrons whose leaves are thick and leathery, have thin, soft, and sometimes hairy leaves. Azaleas leaves will never scale or dots, which is fairly common in rhododendron leaves.

Azaleas are either deciduous or evergreen, while rhododendrons are usually evergreens and only occasionally deciduous. The flowers are the most distinguishing factor with azalea flowers usually being one stem flowers and counting with at most 5 or 6 stamens. Rhododendrons tend to have their flowers in clumps known as ‘trusses’ and have 10 or more stamens.

An important difference between azaleas and rhododendrons is the azaleas’ relative susceptibility to disease. To prevent this, the soil must be kept from waterlogging, watered but not excessively. This one difference is central to choosing which of these shrubs to plant. Rhododendrons are more resistant to disease. This characteristic alone would encourage the amateur gardener in their first landscaping forays to choose a rhododendron over an azalea.

Other characteristics that are useful in identifying between azaleas are rhododendrons are the following:

How to grow and care for Azaleas and Rhododendrons?

In hot climates, azaleas and rhododendrons can be planted year-round while in cooler climates spring is best.

Azaleas are used to decorate medium-sized to large gardens and to create arrangements or bouquets. Alongside hedges, it will bring bright colors in the spring and summer to any garden. The best way to have a healthy azalea is to prepare the soil properly before planting.

It needs to be well-drained and humus-rich, which is slightly acidic to provide the right amount of nutrients. Since their roots tend to stay close to the surfaces mulching well and regularly is essential to help prevent the azalea from drying out.

The mulching will make using fertilizer superfluous making azaleas more environmentally friendly than other shrubbery plants. They are easy to care for because insects and diseases bother them less than other plants.

Shallow roots are something azaleas and rhododendrons share. When planting them, never plant them deeper than they were originally planted when bought from a nursery. The best seasons for planting are in the spring or the fall. Space them 2 to 6 feet from each other to allow easy, horizontal growth.

Like azaleas, rhododendrons need well-drained soil as the worst killer of these plants is overly wet land. To prepare the soil, it is good to add compost around the hole dug for planting. This is especially necessary if the soil is not naturally rich.

Both plants grow more easily in Mediterranean countries rather than in places like England or Germany. This means NOT planting shrub bulbs in clay soil, which collects and retains water. The best type of soil should be light soil rather than heavy soil. A second element that is needed is decomposed or composted pine bark. That is the best basis for mulching that helps rhododendrons and azaleas grow.

Planting shallow means leaving the root bulb slightly above the edge of the soil, not covering the root bulb completely with soil. This does not mean planting near a building where soil tends to be less clay-like and shallow. Concrete makes the soil around it more alkaline and rhododendrons, and to some extent, azaleas thrive on acidic soil.

To provide the right balance of acidic in a garden with a house nearby, it is best to plant them at the end of the garden near the fence rather than near the building itself. Before planting, and especially if the plants have been in pots for a long time, the roots need to be loosened by watering them outside of the container and before placing it in the ground.

Both plants benefit from regular, yearly pruning through having to remove dried or damaged branches is not common as they are sturdy shrubs. While pruning, you have to be careful because these shrubs make their blooms in the prior year’s branches. The best time for pruning is right after they have finished blooming.

You need to prune right above the growth joints of the large leaves characteristic of the rhododendron. At this point, the plant will be starting to grow new leaves and you will avoid accidentally cutting out the dormant buds below this point in the plant. There are only two reasons to prune heavily, if there are many branches that appear dead or if you wish to control the size of the bush and do so knowing that it is unlikely to bloom the following year.

Why do people plant azaleas and rhododendrons? Should the flower be given as a gift? 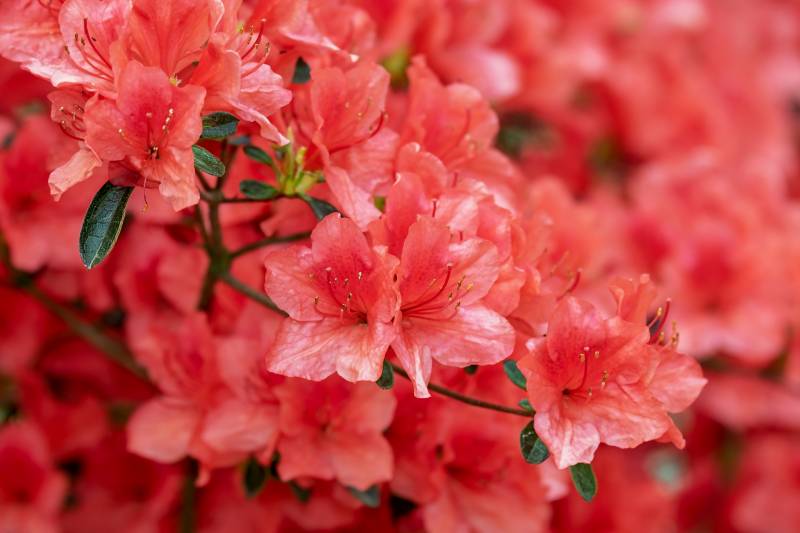 Azaleas are beloved shrubbery because they are easy to plant and maintain. They also grow pretty quickly and easily produce abundant blooms early on. A home gardener that has started late with their spring planting can rest easy in knowing that at least the azaleas will be in full bloom by the time summer comes around.

Their shrubbery characteristics make them am an untraditional floral gift, but they have been known to adorn bouquets, particularly the azaleas. Unlike most other flowers, rhododendrons are best given as already potted plants that can then be transferred into the soil.

Azalea symbolizes femininity and softness. While this might be an ideal gift for someone you care about and think of as being quite feminine, it could also be misconstrued as you trying to tell them they need to make sure to maintain their feminine beauty rather than as a sign of the present day.

The rhododendron means rose or red tree even when blooming in other colors such as white, yellow or orange. This harks back to the original meaning of both azaleas and rhododendrons of low-growing rose. More than the azalea, which can be used in bouquets, the rhododendrons symbolize domestic life in some countries, such as in the United States. In contrast, in other countries, it represents danger.

This latter is likely a result of rhododendrons containing toxins that can harm both animals and humans if ingested. Its predominance alongside garden hedges in countries such as England traditionally would be the result of both colors and toxins, which were a way of warding off intruders.

Whether you live in a warm climate or somewhere cooler choosing to plant an azalea or a rhododendron bush in your garden is likely to be the best long-term decision for creating your landscape.