Where Do Cottonwood Trees Grow

Over the years, Cottonwood trees have become popular in landscaping. They are wildly found across the United States. However, they do well in moist areas and are commonly found near streams, lakes, and marshlands. 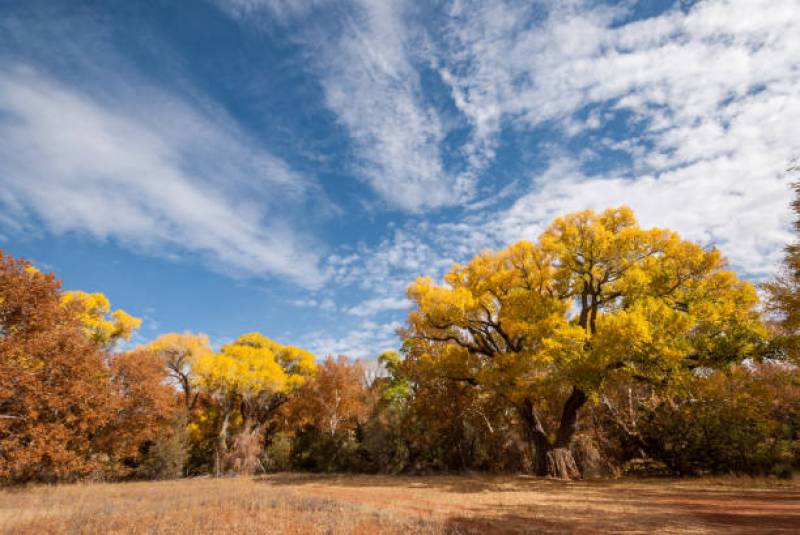 If your home is in the woods away from urban centers, cottonwood trees come in handy in enhancing your landscape and providing shade.

Commonly known as eastern cottonwood, it is a deciduous tree that can grow six feet every year. A mature cottonwood tree can reach a height of over a hundred feet.

Cottonwood trees are grown for their glorious color during fall. However, they are also known to disrupt sidewalks and sewer systems due to their shallow root systems.

When planted next to houses, the trees can weaken the building foundations or other structures like patios. The roots spread very fast in pursuit of water. It is essential to plant them at a considerable distance from buildings, sewer systems, pit latrines, and sidewalks.

Cottonwood trees are fast growers, and their roots are shallow, which can affect surrounding buildings. Their taproots deeply penetrate the soi. Their extensive root network and branch span make them ideal around areas detached from populated residential zones.

Cottonwood trees are popular with recreational parks and campsites. However, female cottonwood trees tend to produce a lot of fluffy seeds. These pose a considerable challenge in keeping grounds clean and tidy as the foliage also attracts insects and pests when left uncollected.

What’s more, the trees are deciduous, and you should expect them to shed leaves once every year. It still remains many landscapers’ choice because of its fast growth and the branch span, which provides good shade. When mature, it can attain a width of up to 70 feet.

Apart from being grown for its shade, the tree is cultivated for fuel and wood. When used in landscaping sites, it adds a dramatic twist to properties and parks. The periodic shedding of leaves and flowering makes the plant stand out.

There are three major cottonwood species:

Cottonwood trees have multiple uses, including the production of pulpwood, lumber, and veneer. They are also known to work well in the manufacture of particleboards.

The wood resembles the willow and is always mistaken for basswood, yellow poplar, tupelo, and buckeye, among other soft woods.

Cottonwood trees are fast-growing, and this partly explains why they produce soft wood. The deciduous tree provides a good ground cover ideal for cooling houses during the hot season.

However, to get the best of them, you need to understand their growing conditions.

Cottonwood trees grow well in naturally aerated and well-drained soils. Like most deciduous plants, they can be grown from the seed or cuttings.

Due to their root system, they thrive in deep soils. Sandy and loam soils are also known to produce healthy cottonwood trees. However, you should provide a soil pH of 5.5-7.5.

Cottonwood trees can survive well in dry soils and are drought tolerant. On the flip side, they also do well in areas prone to floods and well-drained soils.

Surprisingly, the trees survive in acidic and alkaline soils and some clay soils.

Growing cottonwood is easy as long as you expose it to the right conditions. The tree is not sun-shy and does well when exposed to full sun for at least 6 hours every day. However, they are found in select zone across the United States, Europe, and Asia.

Cottonwood trees are found in South West, Central, and Eastern states in the U.S. Other parts where these trees bloom include the Southern parts of Canada and Mexico. These offer the best conditions for growing these deciduous trees.

The eastern, black, and swamp cottonwood species grow in most parts of the east United States.

Black cottonwood thrives in the West-coast regions, western Montana, western Nevada, and north of Idaho. Moreover, these are areas where the trees grow naturally. They are also found in other areas where the soil types are favorable.

Cotton woods can grow in various soils as long as there is sufficient moisture to support their massive root system. They have the capability of storing moisture to take them through droughts.

However, their foliage and fruits can mess up your compound and requires a lot of cleaning.

Cottonwood is suitable for landscaping and adds value to the property or site. However, the tree has its downsides. Its roots are fond of moisture, and they will go to any length to find it. They are known to damage sewer systems, sidewalks, and house foundations.

The majestic cottonwood fast-growing capabilities are the reason why it is ideal for landscaping. However, the soil should be deep and well-drained. It has a maturity period of 10 years, making it the best choice for recreational areas and homes tucked in the countryside.