Here’s Why Do Trees Produce Sap

Trees add beauty and shade to your house if properly grown and taken care of. Irrespective of the inconvenience of growing trees in the house, like touching that sticky sap, people still do because of its beauty.

The sap is like the blood of the tree. Sap acts as a transporter of water, nutrients, minerals, and hormones from the tree’s root to its leaves and trunk. The flow of sap is responsible for the growth of a tree, sending energy to its tip through its branches. 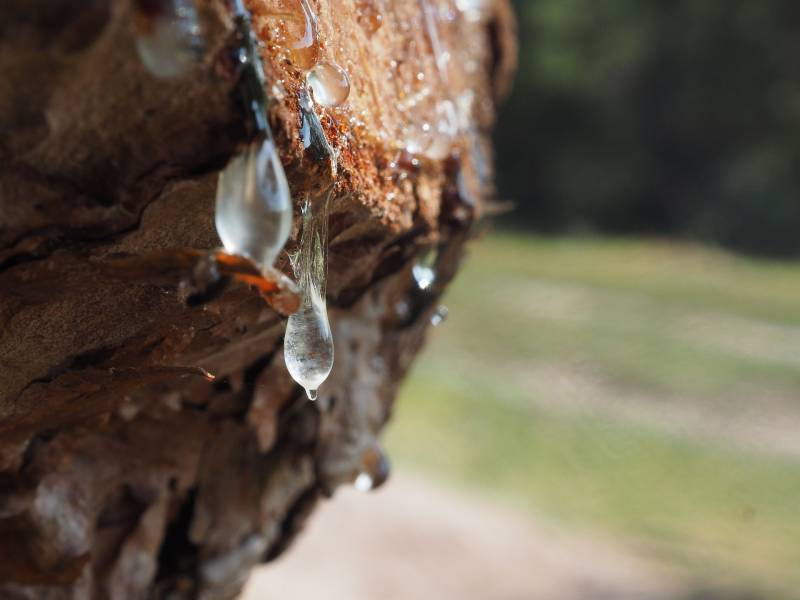 Certain trees produce more sap than others. A perfect example is the sugar maple, known for the uniquely flavored maple syrup made from its sap.

There are a few reasons why trees produce sap, and you will learn that in this article.

How Does Sap Flow?

Sap flows in the sapwood layer through the xylem cells. This process releases carbon dioxide, which causes a build-up of pressure in the tree. If the bark or branches have wound openings, this pressure causes sap to ooze out and cover these exposed areas.

Temperature changes are also responsible for the flow of sap. A temperature drop also causes a pressure build-up in the tree system. Below zero degrees, trees pull water up from the soil through the roots to replenish the tree sap.

This is why sugar maple trees are usually tapped in the spring when the temperature drops at night and the sun warms the tree at noon, making the sap to flow.

Why Do Trees Produce Sap?

We now know that sap is vital to the growth of trees. All trees produce sap, but some produce more than the rest. However, healthy trees do not ooze sap unexpectedly. Maple trees are usually tapped with a spike to pick the sugary liquid in buckets.

Tree tapping causes injury to the tree. This is why the tree sends sap to flow to the injury with the sole purpose of sealing it.

The appearance of tree sap on a tree indicates an injury, pest infestation, or disease. If you notice any unusual oozing or blistering of sap, know that your tree needs treatment and attention.

The production of sap usually begins in summer periods when photosynthesis produces carbohydrates and stores them as starch. This starch is converted to sugar in sucrose, which is then stored in the sap.

A prevalent pest notable for the destruction of trees, forcing the trees to produce sap, is the bark beetle. These wood-boring insects dig into the tree, laying eggs just beneath the bark layer.

After these eggs hatch, the larvae carve a deep burrow inside the xylem, eating the nutrient-rich cells. The tree then acts by activating its defense mechanism. It does this by filling the holes with sticky sap to prevent the insect from laying eggs or trap the beetle.

If you find a gummy sap on the top of a bad bark and sawdust lying on the base of the tree, then you need to check the tree for beetle borers. Trees infested with these beetles need chemical treatments to be saved.

Another reason why trees produce sap is when they produce sap in large amounts. These affect trees that have been infected by Pseudomonas syringae (bacterial canker), which penetrates the tree through openings. This bacterium creates high pressure in the tree’s bark, making sap flow out of cracks and opening.

Signs of the bacterial canker include sunken, watery, or gummy lesions on the trunk. Another sign is the presence of wilt on the branches.

These cankers are usually rampant during the cold weather and are propagated by watering, rain, and pruners. Hence make sure you sanitize your tools before you using.

A fungus known as cytospora canker can also creep into a tree’s injured branches and roots. These wounds act as an entry portal for pests and diseases. Sap from cytospora canker is usually brownish-orange in color. 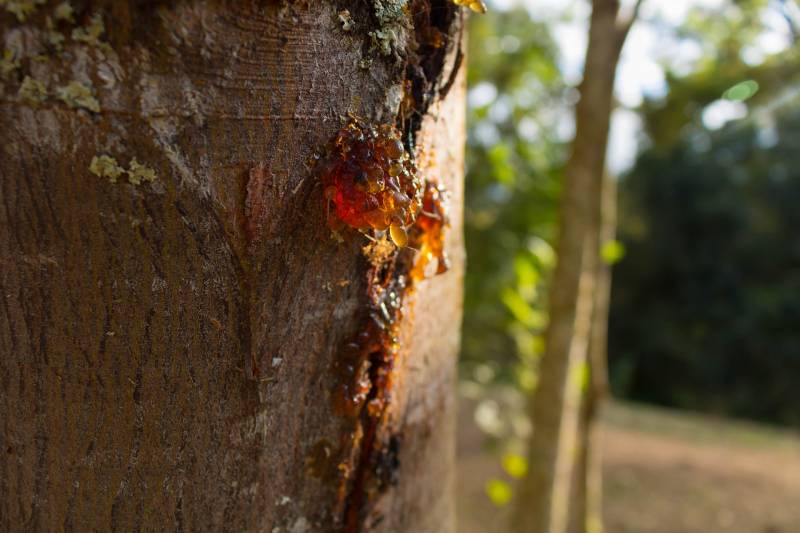 Root rot fungus is another disease that can cause a try to ooze out black or deep-colored sap. When the soil is too wet, the tree becomes prone to Root rot. Do not overwater your soil; create a good drainage, and prevent soaking the soil so the moisture can evaporate.

Another bacterial infection that affects trees is the slime flux – the Slime flux in which a sour-smelling, slimy-looking sap. Sap from slime flux is foamy in appearance with a gray color that darkens as it gets dried up.

This sap is unhealthy to the bark as it eats other layers of the tree. The presence of sap also invites insects like flies, maggots, and ants. Some people try to disinfect the wound using alcohol or bleach. This can also stop the infection.

Oozing sap can also cause secondary issues especially when it attracts insects like aphids and mealybugs. These pests feed on the sap and, in return, produce honeydew. This honeydew is a sticky substance that increases sooty mildew.

Tree pruning is also a cause of sap production in trees. However, you can reduce sap induced by tree pruning by pruning the tree at its right time. A perfect example is the conifers. Pruning the conifers in their dormant season does not produce.

How To Avoid Sap Bleeding

We all know that the sap is important to the well being of a tree. However, it is also essential to avoid unnecessary bleeding. The best way to go about this is to prune trees at intervals at the perfect times of the year.

Some species are best pruned during spring, but the best time for tree pruning is winter.

Now that we know why trees produce sap and the effect of producing excessive sap, we have to take care of and protect our trees.