Home / How To Guide / Why Is My Outside Tap Not Working? How To Fix It?

Why Is My Outside Tap Not Working? How To Fix It?

Outside taps, also referred to as faucets, are devices used to control the flow of liquids, especially water from a pipe or the primary source.

Most outside taps are used to provide water for use around the homestead for domestic purposes. 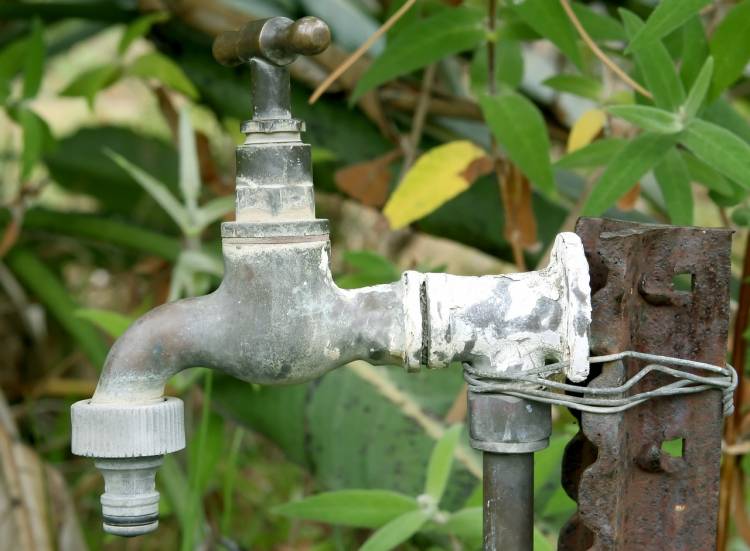 However, it is exposed to several risks outside the house, which may lead to its failure.

These are risks that many people have come to terms with after identifying the problem and solution.

Reasons Why Your Outside Tap Is Not Working

This is usually one of the many reasons why the outside tap may not be producing water.

Blockages are in the form of sediments that have built up, stopping the flow of water by causing clogging in pipes.

This is due to metal deposits in the main source of water, debris, and even rust.

When these particles clog in the pipes, they end up blocking the pipe conveying water to the outside tap.

Corrosion Of The Washer

Corrosion occurs when oxidation takes place in the interior of the pipe walls.

This happens when the tap has not been used in a while, leading to the washer becoming welded/corroded.

The seat is the main place where corrosion occurs.

It seals the tap and stops water from flowing.

It first reduces the water to trickles before stopping the flow completely.

You may also identify this problem by noticing chatters from the tap.

When the tap starts producing unfamiliar noises such as chattering, it signifies a damaged washer.

Leakages divert water away from your tap and prevent it from reaching the endpoint. Some small holes and cracks in your pipes could be causing this leakage by enabling water to escape to the ground before it reaches your faucet.

This causes the tap not to work as effectively as it should.

The pipes could leak and create low pressure due to constant drips and dents. Therefore, in the long run, this causes the water flow to stop.

Leaks are the most common cause of failure of tap water coming out.

This is the kind of pressure that cannot pump enough water from the main tank through other taps.

Hence no water comes out of the taps. For instance, if there has been no rain, the main tank taps water from rainwater.

This pressure becomes too low to convey water into the pipes, which is another reason outside taps are not working.

Most outside water taps are simply installed with a one-way valve inside them.

This valve jams sometimes, and hence no water comes out of the tap.

These valves get damaged, especially during the cold, harsh weather.

The cold weather might have exerted very high pressure along the supply pipe due to freezing and the expanding ice.

This will automatically lead to jammed-up valves, which can eventually break valves.

Rust is one main reason why taps will suddenly stop working.

Generally, you may notice rust on the outside of the tap and think that the inside is okay.

However, plumbers have concluded that rust from the outside shows that it is present in the interior too and will just continue to spread if you don’t act quickly.

This mainly occurs on metals when they come in touch with water.

Moreover, they rust after a long time of use and exposure to the sun.

This rust leads to wearing out and tearing, leading to blockage.

This is another critical thing to check.

If there are several taps in your household, you should check if water is properly flowing through them.

This is in a case whereby they are newly installed, and only the outside tap is not working.

Outside water taps have eased the work while gardening or taking care of flowers around houses.

You do not have to carry around watering and jerry cans to water your garden.

You only need to connect the water pipes to the outside taps and turn them on.

These are also ideal when one is too old to lift heavy watering cans. Moreover, taps are ideal in terms of affordability.

Therefore, proper care and good maintenance practices should be taken on taps to avoid frequent failures.