5 Reasons Why Your Zucchini Has Only Male Flowers 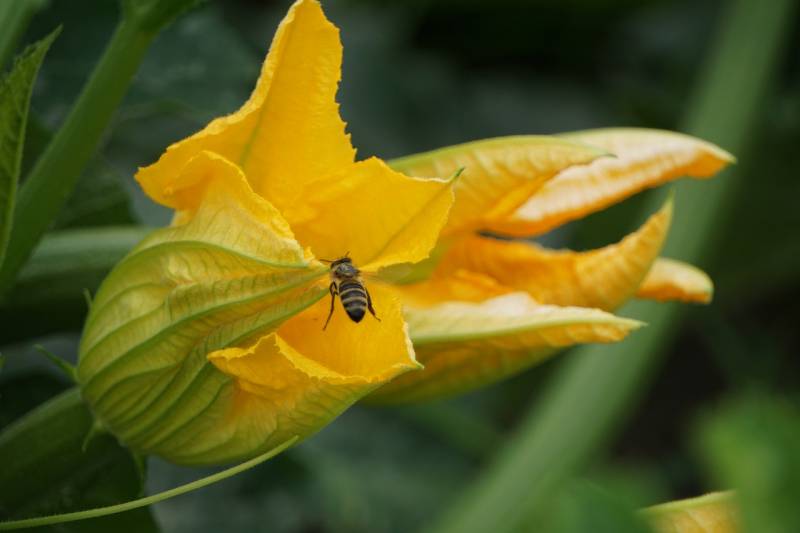 The zucchini plant is a vegetable that is easy to grow and propagate in your garden.

Botanically, zucchinis are classified as fruits that are native to Mesoamerica, North America.

Its easy-to-maintain properties, fast-growing abilities, and savory accompaniment make it among the most sought-after vegetable in most parts of the world.

To sow zucchini seeds successfully, you need to understand all the care and needs this requires.

From regular watering patterns to applying squash bug insecticides, you should be able to identify its needs and harvest correctly.

Understanding How It Grows

The zucchini plant produces both male and female flowers at different times (the male first, then the female flower follows).

The male flower has a long stem and a flower that has pollen, while the female flower is smaller and contains a stigma that has many stems inside.

Male zucchini blooms serve two functions. To open and draw bees to the garden is their first task.

This happens about 10 days before the first female blooms show up.

You will start observing bee activity in and around your garden patch, but there aren’t many, if any, female blooms right now.

A large number of male blooms and humming bee activity is a good sign because zucchini depend on bees for pollination.

This ensures that when the time comes, the male blooms’ secondary function of good pollination will be carried out.

The female flowerer blossoms into a zucchini after it is successfully pollinated.

When your zucchini produces only male flowers, it could be because of a few reasons.

In mid-season, your zucchinis should begin to produce plenty of flowers.

However, when you notice only male flowers in your zucchini plant, need not worry.

You should understand the five few reasons that cause this spectacle.

Even with all the factors necessary for plant growth present, your zucchini plants might still take time to blossom at the right moment.

It is quite natural to have either the male flowers or the female flowers in a specific planting season.

Your zucchinis might produce plenty of male flowers than female flowers in a particular season and vice versa during the next season.

Solution: You should give the zucchinis time to grow, as you continue to water them and groom them accordingly.

Good weather is another critical ingredient in making plants and vegetables mature fruitfully.

The fluctuation from the hot season to the cold season and vice versa can cause most zucchinis to grow unpredictably.

If you notice plenty of male zucchini flowers in your garden, do not take drastic measures.

Frost and extreme cold seasons, which fall during the flowering dates, can also hinder zucchini growth.

Why so? Because plants and vegetables react quickly to the weather pattern, you should notice altered growth in different plants.

You might have noticed reduced flower, leaves, and stem production in most zucchinis during this season.

Also, there will be an increase in root damage during the extreme cold season.

Note: Most zucchinis grow poorly in zones that receive temperatures below 15°C.

Male flowers do not require a lot of energy to shoot and mature as opposed to female flowers.

Once you notice too many male flowers in your zucchini, it is just normal.

For the much younger zucchinis, it is often 8-9 male flowers to a single female flower produced.

As the young plant matures, the ratio tends to balance.

You should notice between 4-5 male flowers to between 2-3 female flowers.

Note that: If there are more female flowers than the male flowers in your zucchini plants or any other plants, then the odds of producing abundant fruits will be delayed.

Male flowers should be in plenty to supply enough pollen count that is required to pollinate and fertilize the female flower to produce fruits.

The vital nutrients in the soil that favor plant growth include; nitrogen (N), phosphorus (P), and potassium (K).

Zucchini plants and other plants, in general, require all these nutrients to grow healthy and produce flowers.

However, these secondary nutrients are required in smaller quantities than primary nutrients.

Your zucchini may not be producing as many flowers as they should, though, if you use too much fertilizer.

The nitrogen content of the soil rises above normal levels as a result of overfertilizing.

Zucchini frequently produces only male flowers as a result of high nitrogen levels.

Although female flowers won’t bloom, your plant will seem to have healthy, dark-green foliage.

Additionally, if you have poor garden soil, it will not support efficient plant growth.

The production of female flowers needs a lot of energy from the plant itself.

So, if you have a struggling zucchini plant in your garden, it will produce fewer flowers (in particular, the female) because it is struggling to stay alive.

Quick Tip: Once you notice yellowing or browning of zucchini leaves, you need to adjust your cultivating practices. Leaves that start to turn yellow is an indication that there is something wrong with your plants.

Just like humans, a stressed person’s productivity is negatively affected.

The same case applies to zucchinis and other plant species.

When your zucchinis are not watered regularly, exposed to long sunshine hours, and planted in nutrient deficiency soil, they will produce a lot of male flowers as opposed to female flowers.

Plant stress can also occur when the plant is being attacked by pests (squash bugs) and other harmful insects.

Zucchinis will not be ready to bear fruits if the favoring growth conditions are unavailable. It will ultimately produce only male flowers.

To encourage more female zucchini flowers, you need to follow the four measures below.

Zucchini plants produce male flowers first because it requires fewer nutrients and energy to do so.

The female flowers are harder to make and require increased energy levels.