Home / Gardening Guides / How Late Can You Plant Sunflowers? – Things To Consider

How Late Can You Plant Sunflowers? – Things To Consider

Whether planted outside or placed indoors, sunflowers are beautiful, but how late can you plant sunflowers?

Their bright yellow blooms remain a distinct work of nature in late summer and fall.

Their edible seeds are another reason they are annually planted, mostly sown in late spring.

Yet, a person who didn’t plant during this period could be worried about how late one can plant sunflowers.

What are the chances of sunflowers surviving if they are planted after July?

Can their seeds be sown in late summer and survive fall? 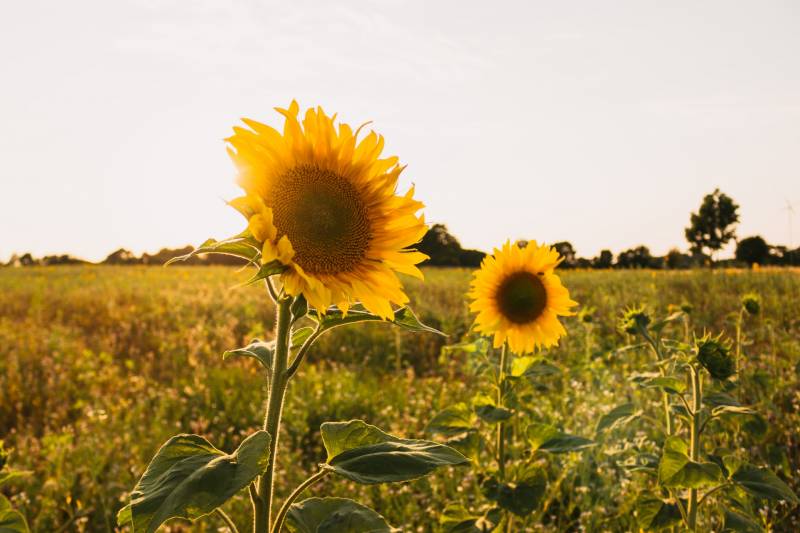 Firstly, it is significant to understand the nature of sunflowers, and their name can perceive an understanding of their nature.

The name “Sunflower” is a portmanteau derived from the words “sun” and “flower.”

The portmanteau was created for these yellow flowers because they twirl towards the sun when the sun sets.

Hence, they are heliotropic.

Usually, these flowers need up to six to eight hours of sunlight to remain healthy.

For this reason, they blossom in summer.

Moreover, they sprout better when planted directly in a garden.

When Is The Best Time To Plant Sunflowers?

Sunflowers can germinate for as long as seven to ten days when sown.

Also, it takes about fifty-five to seventy-five days before they bloom.

Therefore, it is best to plant them after the last frost of late spring.

A light frost may not cause severe damage to your flowers.

On the other hand, heavy frosts could cause your flowers to freeze and become dehydrated.

On that account, it is best to sow their seeds between April to July.

Sunflowers bloom mainly in the middle of summer and early fall.

Additionally, if you are planting them for the bloom, you should plant them during the recommended period so the flowers will not be prevented from flourishing by the early frost in the fall.

How Late Can You Plant Sunflowers?

The answer to this question depends on where you plan to sow the seeds.

Also, the time limit varies according to the various locations.

Hence, the answers to the question are provided below.

How Late To Plant in the Garden

If you did not plant your yellow flowers in July, you might wonder if there is still time to sow the seeds in your garden.

Even though you did not sow the seeds in July, you can still sow them in mid-August.

However, after mid-August, it is best to keep your seeds to plant until the following year.

The answer is simple.

As explained earlier, it takes the flowers an average of two months to bloom.

If the sunflowers are planted in late August, the blooms risk being destroyed by the early frost in October before they can mature.

How Late To Plant in a Container

If you don’t plan to plant many sunflower seeds or merely need a few bloomings to decorate indoors for fall, you should consider planting them in a flowering pot.

Growing sunflowers in a container make it possible to take them indoors when it begins to frost.

Therefore, you can sow the seeds in a container if you are planting in late August.

However, ensure to plant them in a large flowering pot, especially when the seeds are from a variety as tall as 10 feet.

Wet the flowers occasionally and keep them in a space that allows sunlight to penetrate.

How Late To Plant Sunflowers According to Different Zones

The time limit to plant sunflowers depends on the climate peculiar to a region.

In frost-free tropical and subtropical regions, sunflowers can be planted throughout the year.

Even in the US, there are different time limits for other locations.

For instance, in North Louisiana, sunflowers can be planted in mid-August.

They can be planted in the first week of September in South Louisiana.

How To Keep Your Sunflowers Healthy When Planted in Mid-August

Since you are planting late already, you want to avoid planting unhealthy seeds.

Sow each seed within six inches apart from the other and one inch deep into the soil.

Before the seeds begin to germinate, protect them from birds.

Also, spread a net over the area planted to prevent birds from picking out the seeds before the flowers sprout.

Make sure the soil you sow the seeds on is fertile so they can germinate quickly.

Since you are planting late, you should refrain from taking any chances of late germination.

If the soil does not have sufficient nutrients, add a slow-release fertilizer to the ground.

However, do not add fertilizer to healthy soil. Doing so can produce excess Nitrogen in the ground, causing the stems to break.

Instead of applying fertilizers to healthy soil, add compost to the ground.

Also, plants in the soil absorb and retain water.

Although sunflowers can thrive without much water, it is necessary to water the seedlings daily around the roots.

The seedling needs to stay hydrated so they won’t dry off and die before they have a chance to grow.

On the other hand, water mature sunflowers only once every week.

Restrain from over-wetting the soil because the leaves can turn yellow when the soil is too wet. Also, wet soil can lead to a fungal infection, preventing plants from blooming.

4. Protect From Other Pests

To grow healthy flowers, protect them from these pests.

You can create an electric barrier to keep away deer and squirrels.

Also, diatomaceous earth can be applied to the soil close to the sunflowers to kill slugs and snails that come close to them.

What happens if you plant your sunflowers too early?

Sunflowers are often associated with summer. And just by seeing this yellow flower, you cannot help but give a little smile and feel warm and happy.

Because sunflowers are typically grown during summers, they are naturally heat tolerant and also grow quickly, being one of the easiest-to-grow plants.

But what happens if you plant your sunflowers too early?

They don’t become the kind you’re hoping for; instead, they become weak sunflowers.

Just like planting them too late, where they don’t become as big as you hope they would, planting too early doesn’t give you any favors either.

Planting them a little too late depends on where you live too.

If you live where it gets too hot during summer, it’s best to plant sunflowers during the last few weeks of summer.

This keeps them from being scorched by too much heat and allows them to grow and become the happy sunflowers they ought to be.

A Summary Of How Late To Plant Sunflowers

To summarize, Sunflowers can be planted as late as mid-August, but after that period, keep the seeds for next year’s planting season.

However, if you have to plant sunflowers that year, you can grow them even when it’s late August in a container.

That way, they can be planted in late summer and survive fall.

Nevertheless, make sure to take special care of sunflowers planted after July.