Home / Garden Care / How To Get Rid Of Invasive Alstroemeria? – [4 Methods That Work]

How To Get Rid Of Invasive Alstroemeria? – [4 Methods That Work]

Alstroemeria, also referred to as Peruvian Lily or Lily of the Incus, is a beautiful cutting garden flower.

This plant is from the Alstroemeriaceae family and is native to South America.

Growing this plant is easy as you can grow the rootstock or plant seeds. 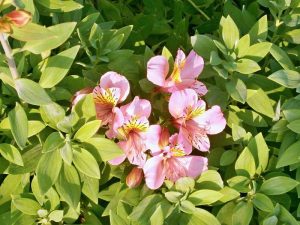 Whichever way you grow it, the plant should grow easily if planted in the right soil and watered as needed.

However, getting rid of it from your garden can be problematic. This is because it develops a strong root system that is hard to remove completely.

So, if you’re fed up with your Alstroemeria plant and want to get rid of it from your garden, then you’re in the right place.

In this post, we’ve included different ways through which you can effectively remove Alstroemeria from your garden.

These are as follows:

Remove Every Piece By Hand

First and foremost, you should try removing the Alstroemeria plant by use of the hand. Dig up the plant at the right time and get rid of all the roots.

The best time to dig up the plant and remove the roots by hand is during autumn.

At this time, the soil becomes dump and easy to work with.

Since the soil is soft, you can dig up the plant and follow the roots without leaving a single piece.

After you’re done, you should monitor the area where the plant was based in the spring.

If you see new shoots of the Alstroemeria plant, you should dig them up so that they don’t develop again.

If you leave the plant to flower, it will produce seeds, and you will have to start all over again.

Destroy the plant tubers as you remove the roots. Repeat this procedure until you’re sure that you have removed any trace of the plant in the soil.

One of the most popular weedkillers to use is the Roundup weedKiller.

To eradicate the Alstroemeria, you will have to apply the weedkiller on the plant by either smearing it using a brush or spraying directly.

If the plant is alone, you can spray it, but if there are other plants close to it, then you should smear the weedkiller on the plant.

This prevents endangering other nearby plants. For the weedkiller to be effective, wait until the plant produces a lot of foliage.

When the Alstroemeria produces plenty of foliage, the level of the active ingredient (Glyphosate) in the weedkiller will be absorbed in huge amounts.

However, you should apply the weedkiller at least twice to eliminate the Peruvian Lily.

The best time to get rid of Alstroemeria is during mid to late summer when the plant has plenty of foliage and is about to go into extinction. Note that the results may not be instant until spring.

So, exercise patience, and you will no longer have an Alstroemeria problem in your garden.

Make sure that you select the best weedkillers as some are not very effective. That’s why we’ve recommended Roundup weedkiller as many gardeners applaud it.

Cut Down The Plant And Cover With Black Polythene

Even though not very popular among gardeners, using polythene to get rid of Alstroemeria works as well. However, this method is slightly cumbersome when compared to the first two.

Start by cutting down the plant to ground level. Next, pin down black plastic on top of the remains of the plant.

To prevent the polythene from being blown away, keep it on the ground by placing bricks on all edges.

This will avoid any shoots from escaping underneath and developing all over again. Leave the black polythene on the surface for at least three months.

The plastic on the surface will prevent the shoots underneath from accessing air and sunlight, which may promote their growth.

Additionally, the polythene will cook the remains of the plant, which will eventually die.

After removing the polythene, check whether any Alstroemeria roots are remaining in the soil.

Proceed to dig them up and repeat the process.

The last method on our list is the combination of the three methods.

If you’ve tried all the first three methods and the Alstroemeria doesn’t seem to die, then you can try this final method.

The method includes applying a weedkiller and leaving the plant for a month.

As suggested earlier, you should use Roundup weedkiller or another quality weedkiller. After that, cut down the plant and remove most of its roots and tubers from the soil.

Again, you should follow the same method and get rid of the roots when the soil is soft and easy to pull out the roots.

And if you suspect that some roots or tubers are still in the soil, cover the area using black plastic.

The plastic will ensure that all the remaining tubers in the soil are deprived of oxygen and sunlight, which will make it to suffocate and die.

This is one of the most reliable methods of getting rid of the Alstroemeria plant as it combines all the three techniques.

If you’ve been struggling to get rid of the Alstromeria plant, we’ve made your work easy.

Simply follow the methods that we’ve included above, and you will be successful in removing Peruvian Lily from your garden.

Note that any method that you choose may not work on the first try, but you can repeat it to ensure you’re successful.

Furthermore, you can combine different methods to ensure you have a successful outcome.

However, you will have to be patient as the Alstroemeria plant may never go away completely. Before growing any plant or flower in the garden, it is vital to find out its ins and outs.

This will help you to avoid different problems, such as the ones caused by the Alstroemeria plant.