Home / Flowers / Brown Spots On Hydrangeas – What Does It Mean & How To Treat It?

Brown Spots On Hydrangeas – What Does It Mean & How To Treat It?

Hydrangeas are popular among many homeowners due to its big clusters of beautiful blue, pink, and white flowers that blossom in the summer. This flowering shrub usually comes in different varieties hence why its leaf shape, as well as flower color, differ.

Nevertheless, all these varieties have one thing in common, and that is a common enemy, which is fungal infections, bacteria, and pests.

In this article, you will be taken through several fungal and bacterial infections that often cause brown spots on hydrangeas. Consequently, you will be in a great position to know what steps to take to address this issue and ensure your garden maintains a striking look. 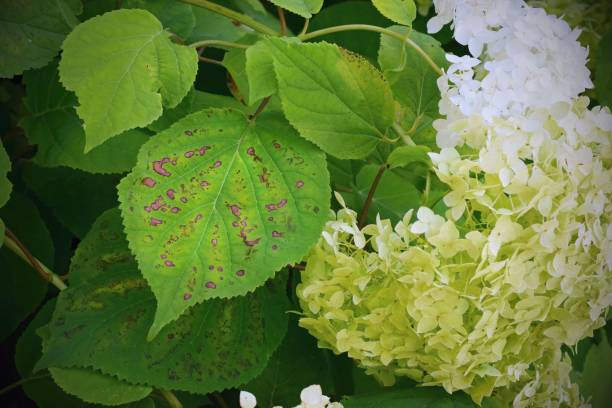 This is a common infection that results in brown spots on the leaves of the hydrangea and is caused by the leaves regularly being in contact with water either due to irrigation or rain.

It usually starts as either a purple or brown spot on the plant’s leaves near or close to its base. These spots, which have a diameter of 1/8″ to 1/4″, are tiny and appear scattered throughout the leaves.

Furthermore, these spots on the hydrangeas start developing gray or tan centers and which are then engulfed by purple or brown halos.

If nothing is done to contain this infection, the leaves eventually yellow-green and the drop. However, incidences of the Cercospora leaf spot killing the target plant are extremely rare.

But, severe leaves spotting as well as premature leaf shed may lead to a reduction in the flower bud and plant’s vigor that occurs during the present season. Additionally, this leaf disease also results in a hideous look at the hydrangeas plant.

There are a few things you can change about the landscape of your garden to either slow down or altogether prevent the spreading of the Cercospora leaf spot. These include:

The occurrence of the Cercospora leaf spot illness usually does not show up until its between mid and late summer. Therefore, you should make use of a protective fungicide to spray all the areas where you notice the signs of this infection to control its spread.

Additionally, if the plant suffers from any visible damage each year, you then need to use a copper-based fungicide as this helps in treating this condition.

For the effective treatment of this disease, you need to start the treatment either early summer or late spring when the symptoms start showing. Finally, check the product label to have an idea about the mixing and application guidelines. 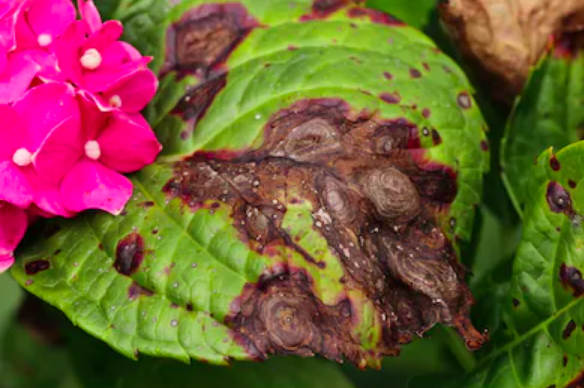 Anthractnose usually occasionally appears in the landscape and typically infects only the bigleaf hydrangea, which is also known by some people as “French” hydrangea or “mophead.” This leaf disease creates big snowball-shape clusters of flowers that have shades of white, red, pink, or blue.

Whereas this infection is mostly prevalent in big field plantations or greenhouses of carefully managed hydrangea, outbreaks can also reach residential areas and affect your garden. The fungi responsible for this disease is the Colletotrichum gloeosporioides, which can attack both the hydrangea blooms and leaves.

The conditions that favor the spread of brown spots on the hydrangeas plant are wet, hot weather and plants that are heavily fertilized also are more prone to this infection.

The first sight of the brown spots on hydrangeas is somewhat irregular and circular, as well as slightly sunken on the plant’s fleshy leaves. At the center of these leaves, these spots may reach a diameter of one inch or more and subsequently start changing in color from light brown to tan.

Moreover, slightly lighter, as well as alternating rings of dead tissue, usually make the spots to have a target-spot or bull’s-eye look. Subsequently, when bigger spots border either the midvein or any other main vein on the leaf, they start showing a more distinct angular shape.

If the ideal conditions for the development of this disease persist, the big, irregular, dark brown spots will quickly spread across the flower petals and leaves of the hydrangeas. Finally, the symptoms of this infection sometimes appear almost at once on both the blooms and leaves in the upper and lower areas of this plant.

Prevention and control of the Anthractnose

There are several measures you can take to counter the spread of this infection and this include; 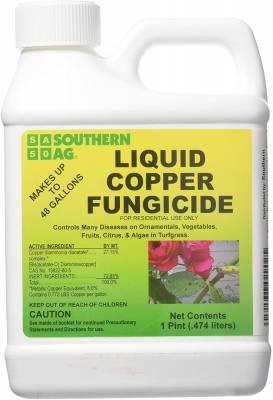 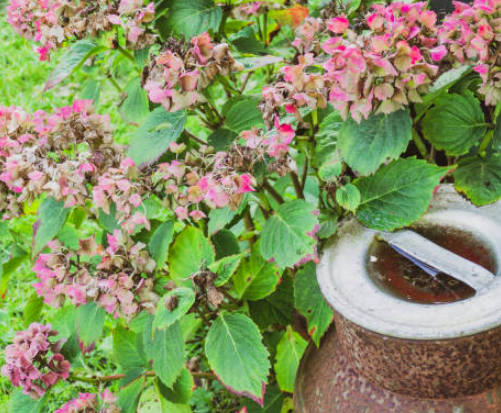 Diagnosing this leaf disease is rather straightforward as it looks unique compared to some of the most common infections that a prevalent across plant leaves. When the leaves of the hydrangeas get infected with this disease, the formation of yellow spots starts on the top side and orange spots below. As time passes, the color of the leaves will eventually become brown and then fall off.

Controlling this disease is quite challenging; however, it can be managed by thoroughly cleaning all the sick debris and leaves that have already fallen from the hydrangeas plant. Subsequently, thin the inner side of the hydrangea once you are done with disinfecting the pruning shears.

Additionally, if you suspect that rust is likely to be persistent, you should instead opt for the cultivar “Frosty” is more resistant to this infection.

How do you treat hydrangea rust?

This leaf disease usually spreads due to the splashing of water on the hydrangea plant leaves, which mostly happens as you are watering the plants. Therefore, while watering, you should always confirm that you are spraying the water towards the plant’s base to try your best and ensure the leaves above remain as completely dry.

Likewise, you can also remove all the disease-infested leaves if the condition is not very serious, and this will be enough to prevent the spread of the rust. However, if the issue is severe, you then may need to make use of fungicide to this disease. 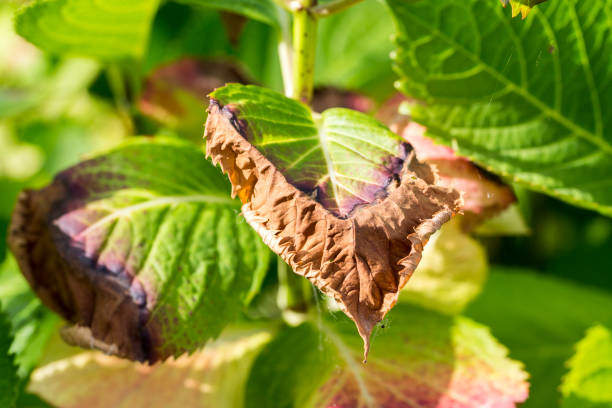 Hydrangea plants that have either been planted recently or a growing in a pot are often susceptible to intense use of fertilizer. Subsequently, because of this, you may start to notice the leaves are gradually turning yellow and eventually brown around the edges as well as the tip a day or two after applying the fertilizer.

Also, the roots of this plant may have suffered from slight burning. Furthermore, the use of Aluminum sulfate, which occasionally gets added to the soil change the hydrangea blooms color, also does cause root damage if you apply too much of it.

How do you treat leaves edges of the hydrangea plant turning brown?

If you are looking to treat the brown spots from your hydrangeas plant, you need to flush the soil surrounding it with water regardless of whether it is on the ground or in a pot.

Doing this removes almost all of the salts found in the soil. Consequently, you should not water your hydrangea plant for about one or two days to ensure the soil on the surface is somewhat dry. After that, you should go ahead and start watering your plant as normal.

Nonetheless, if you have your hydrangea plant growing from the container, confirm that all the water drains from below the pot after completing each watering. This is vital as it will flash out the salts regularly.

Additionally, you should only fertilize your hydrangeas plant after a root-burn once the plant looks healthy, as this is an indication that it is now healthy, and the root system is well-developed. 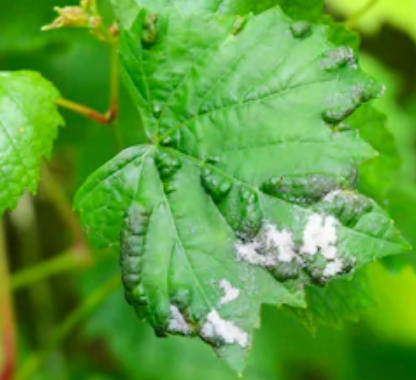 This is also another reason for the appearance of brown spots showing on hydrangea leaves. Fortunately, identifying it is easy as it starts with having a powdery, pale gray coating.

It usually spreads through spores from one plant to another, meaning it can quickly spread if proper measures are not taken to contain its spread. The spores transfer generally during cold nights as well as hot days, and big swings in temperature a significant factor that aids the spread of this disease.

How do you treat powdery mildew on the hydrangea leaves?

The best technique of getting rid of this fungus is by taking off the infected leaves or any other part of the plant. You should only remove the whole part of the plant that the disease affects in case the issue is severe.

As you water the plant, make sure only the base is getting watered to prevent the leaves from getting wetter and thereby quicken the spread of these fungi.

Moreover, you should make a point of watering in the morning as this gives the leaves the chance to have a whole day of drying before the temperature levels drop later during the day. If you are looking to kill the fungus, use an organic treatment, and carefully follow the written instructions to make sure it is effective. 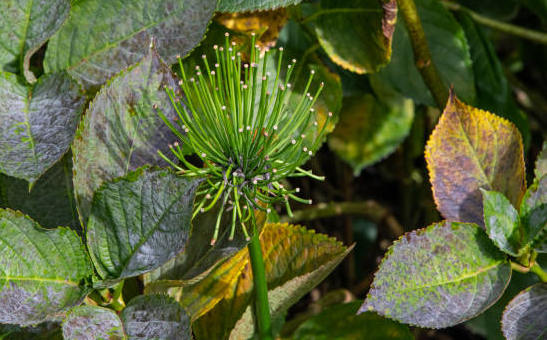 During hydrangea’s growing season, that is summer or spring, the leaves sometimes suddenly turn yellow and the brown. Subsequently, they start falling off, and the reason for this infection usually is an infection is a problem with the plant’s roots.

It frequently happens before the plant has had enough time to develop a deep and robust root system, for instance, before the hydrangea is transplanted from the pot or immediately after that.

The three most common causes of this happening include;

Any of these reasons can result in the death of either a part of the entire root system. Once the root system has been destroyed, the leaves start to wilt, turn yellow and eventually brown.

Apart from these symptoms mentioned above, keeping your plant extremely wet also results in the rotting and eventual death.

How do you treat yellow leaves on this plant?

Once you allow the plant to dry completely, the first thing you need to do is water the whole root system exhaustively. If you still have the hydrangea inside a pot, place it in the water tub and rim it up until every dry root has been soaked in water entirely.

Consequently, let the plant to drain completely. Because the roots are damaged, they cannot deal with the soil as it is incredibly wet. Therefore, you should give it time between every watering period to make sure the soil dries out marginally and hence allow the regeneration of the roots.