Home / Flowers / How To Take Care Of Hydrangeas In Winter? [Full Guide]

How To Take Care Of Hydrangeas In Winter? [Full Guide]

Their big bushels of flowers grant them a beauty unrivaled in the shrubbery world. Their charm is that they are wary of cultivating in almost any soil.

Their color depends on the acidity of the soil. The color will be blue in soils with less than 5.5 pH, while soils with more than 5.5 acidic soils tend toward pinks.

If you get white flowers, it indicates a hydrangea that is not affected by acidity.

Due to the size of most hydrangeas, they are suitable for garden sites alongside borders. However, the smaller varieties can be placed in a pot, though these two are larger than most potted plants.

What type of plant are Hydrangeas? 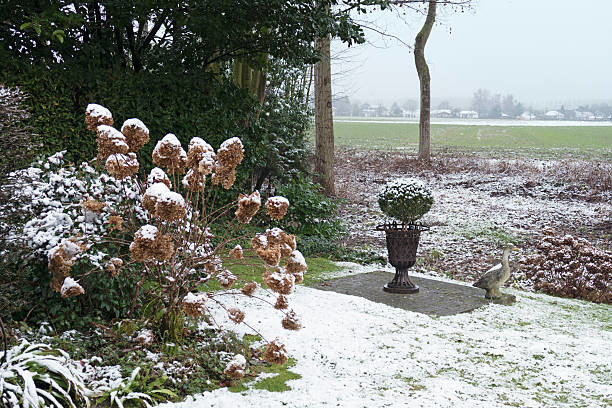 Hydrangeas are woody shrubs with bright, beautiful heads of flowers. While they are hardy plants, they are susceptible to loss of moisture.

To prevent problems in the winter, choosing the right type of hydrangea is essential.

First, consider how much sunlight it needs. Second, what type of soil is needed, and whether you need to compost more to provide it with the right level of acidity?

Another consideration is the color and size of the blooms that you want. Regardless of the variety, all hydrangeas bloom while receiving constant morning sunlight and afternoon shade.

The way hydrangeas bloom depends on their specie. They thrive in moist but not overly wet soils. The best amount of sunlight is full sun in the morning with shade in the afternoon. For this reason, it is best to plant them in the spring or fall when most areas enjoy partial sunlight.

The following are the common types of hydrangeas. They are defined by the type of flowers they grow and their blooming times:

The most common variety is the Bigleaf, the shrub that adorns many gardens. Their buds form in late summer and then bloom in the fall. This means that you need to avoid pruning a big leaf after August 1.

Hydrangeas at home or for decorating?

Despite their shrub nature, you can use hydrangeas in bouquets. The best way to place them in a bouquet is to cut around the stem region and place it in cold water to prevent it from wilting.

Once in the water, you can make it smaller by removing the lower leaves from the remaining stem; once in the vase, place it in an excellent spot.

There are several ways to decorate with hydrangeas:

When decorating and using hydrangeas outside the garden, it is crucial to remember their symbolism and meaning. As their name implies, hydrangea means water vessel, reflecting their need for regular watering and its cup-shaped flower.

Their symbolism is more debated, with some thinking it stands for vanity and boastfulness because of the abundant petals. In contrast, others see in them an expression go gratefulness on the giver’s part towards the recipient.

How To Care For Hydrangeas In Winter: What are their weaknesses?

Though beautiful, hydrangeas can be finicky, especially in the winter months. It is crucial to prepare them for a harsh winter. Otherwise, they will not bloom in the spring.

First, prune away any dead branches, but avoid cutting new ones. You can find most dead branches at the base of the plant.

The next step is building a wood-stick frame around the plant.

Remember, all hydrangeas will lose their lives during the winter months. Do not panic! Your shrubs aren’t dying yet. It only indicates that the plants are entering a period of dormancy.

Even during the winter months, the roots need to be watered. This is especially true if you live in an area with a dry winter without much rain or snow.

If you get snow, it’d be best to keep the hydrangea base covered with wood chips, oak leaves, pine straw, or some other type.

Even if the winter you live through is more rain than snow or completely without snow, the chipping will protect you from rodents and bunnies that will be foraging for food during the winter months.

Mulching is essential for winter, and its benefits go beyond general protection. If the compost has been properly spread, it will provide protection and environmental consistency. This is necessary in parts of the world where temperatures in the winter fluctuate between freezing and below freezing for weeks or even months.

This fluctuation of low temperatures leads water molecules in the ground to freeze and de-freeze cyclically throughout the winter. This contracting and melting water around and inside the roots leads to heaving.

The heaving of the roots disrupts the entire root system, causing the hydrangea’s death. The best material for protective winter mulch is pine straw, oak leaves, or wood mulch.

If it is not removed, the increasing heat will create moisture around the stems, leading to rot resulting from a lack of air movement. Excessive heat with the mulch still covering the ground around the plant can lead to rots. 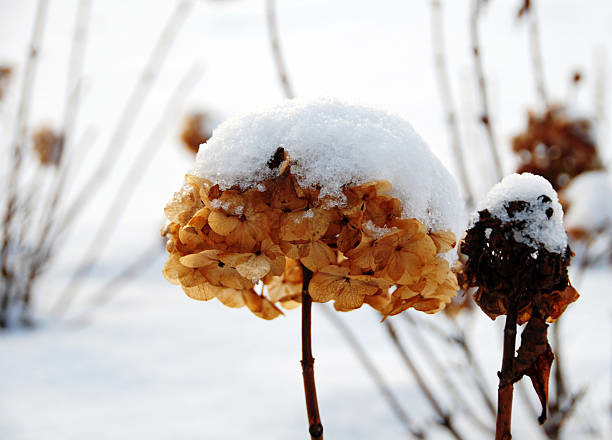 You may want to consider a few factors if you grow your hydrangea outside its usual growing zone in wintertime. If you are carrying or transporting your hydrangea in a pot from a warm climate to a colder one, it will need an extra layer of mulch for better protection. It might also help if you put a wire cage around the shrub and wrap burlap around the wire.

While the beginning of the winter is the best time to mulch, if you have had a sudden cold spell and have not yet mulched, you are still in time. Although your hydrangea may have been affected, the hydrangea will be fine. Mulching will prevent further damage.

As mentioned before, even in the dormant state of winter, hydrangeas still need to be water. However, the amount of watering varies depending on the type of winter you experience.

If you are in an area that receives lots of snow, you may spend little energy watering it. The same applies if your winter is rainy. The plants usually have scanty leaves during winter, so watering is minimal.

The best measure, in this case, depends on the level of dryness of the soil and stems. You don’t need to water them if they aren’t bone dry.

One way to water hydrangeas in the winter is to create a small hole in a bucket filled with water and place it at the base of the plant allowing the water to trickle out slowly. This is similar to the plant self-hydrating as much as it needs.

Another option is to turn the hose on at a slow cricket at the base of the plant, leaving it there for an hour.

Note that the colder the temperatures, the easier it is to water them using this method than spraying.

Spraying may lead to the water turning into ice as it falls onto the plant. Another way to prevent drying out in the winter is to water daily after composting, before mulching, and before the ground freezes.

Another winter survival method for hydrangea is adding compost to the plant’s base during the fall and before adding the mulch for temperature protection. This will allow the compost to break down over the winter, preparing the spring’s nutrients.

You must be careful not to add nitrogen to the compost or soil because this could trigger the addition of new leaves in a very late season. However, the best option will be well-aged manure or other organic matter covered with mulch.

It is best to apply this type of nutrient-rich matter in the early fall if you have harsh, long winter, but if you are in a warmer climate with mild winters, it can be applied in the late fall or early winter.

There are a few pests and diseases to which hydrangeas are susceptible. They include:

Pruning is one secret to having a blooming hydrangea. It does not detract you from using the right location for sunlight and preparing the soil with composting or fertilizers.

Note that pruning isn’t the same as removing dead flowers, which with hydrangeas is called deadheading. One of the best practices for pruning is to prune very close to the base of the dried leaf and dried bloom to avoid accidentally pruning away the new buds that are grown within the old wood of the previous year.

Pruning is more invasive and is used to maintain the shape or remove visibly dead growth. The parts and time to prune are known by the type of hydrangea you have, when it blooms, and how it cultivates its future buds.

Pruning times vary depending on the type of hydrangea:

Generally, those hydrangeas that bloom in the summer need to be pruned afterward, but with some limitations. The summer bloomers are also those shrubs that grow the buds for a new bloom inside the stems of the existing shrubs.

That is why they are called new wood bloomers. These are best pruned in the late winter as they lie dormant; even then, only prune away dead branches.

If you want a complete plant, the best option is to prune down to the base. The two oldest stems leave behind the newer stems.

Maintaining a balance in their care is essential to having blooming hydrangeas. Since they are mostly planted as shrubs, they are exposed to all the seasons in those areas of the world that experience them. For this reason, composting and mulching are essential for their survival during winter. In extreme conditions, it’s recommended to wrap them rather than surrounding them with wooden stakes and wiring.

While the hydrangea is considered a hardy plant and, in comparison, less demanding than others, it can also be delicate. Excessive watering or too underwatering will cause trouble for the root. Its roots are susceptible to temperature changes.

However, endeavor to balance the amount of water given while pruning and the type of compost used.

Whether it’s a bouquet for a wedding or a wreath on a door, you can use bountiful flowers in various ways for decoration. You will always enjoy its abundant beauty.