Why Is My Conifer Hedge Going Brown? [4 Reasons]

Conifer hedge plays a vital role in our homes and gardens.

The hedge reduces noise pollution for individuals who live near busy roads.

Additionally, they cleanse the air by absorbing emissions, more so from the traffic. 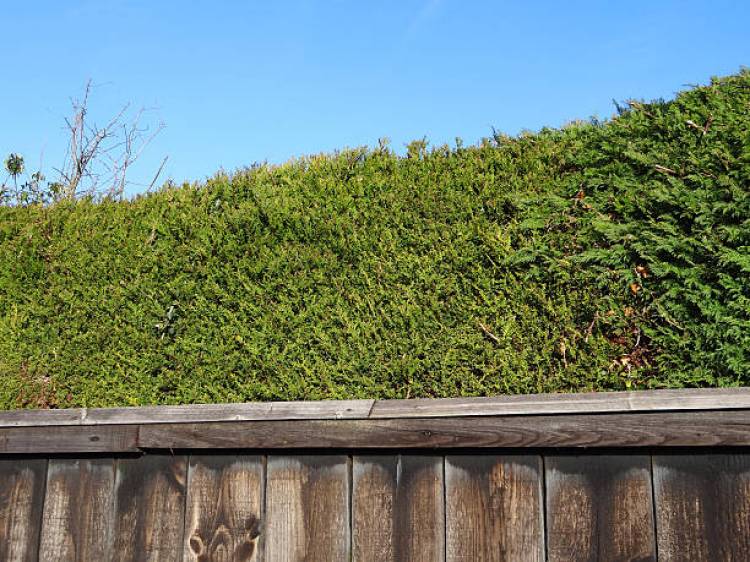 But like any other plant, they get attacked by diseases, insects, and adverse weather conditions.

If you notice that your conifer hedge is turning brown, don’t panic! Instead, try to find out the reason behind it.

This will help you to deal with the root cause of your conifer browning (see what we did there?)

Don’t wait for the browning to spread further, as it might kill your plant.

No matter how brown your conifer hedge becomes, you can still revive its dense and green appearance.

Without further ado, let’s look at some of the causes of your conifer hedge going brown and what YOU can do about it!

1. Over Trimming The Hedge

Trimming the hedge is essential as it ensures the entire conifer receives a fair share of sunlight for even growth.

However, over-trimming can cause more harm than good.

Avoid trimming your conifer up to the old wood – it will not regrow, which will cause it to go brown.

For best results, we suggest trimming the conifer hedge in late winter or early summer when it is inactive.

Apart from over-trimming the hedge, trimming it at the wrong time of the year can also cause it to go brown.

For instance, trimming the hedgerow during autumn, hot days, or prolonged drought is a big no.

This is a difficult period for your plant, and trimming it causes more stress, which leads to browning.

You can prevent your evergreen from browning by trimming at the right time.

If you don’t know how to trim well, hire a professional to avoid damaging your hedge.

Many insects see your hedgerow as a source of food.

If you aren’t careful and keep a lookout for them, they will attack and kill your hedge.

Some insects feed on the foliage, while others suck the saps.

Cypress aphids are famous for causing conifers to turn brown.

Their damage is usually noticed around late spring and summer.

Aphids love sucking the sap from the conifer needles, which turn brown when the damage is already done.

Nevertheless, you can still know that aphids were around, as they leave a sooty mold that develops on the sugary honeydew they produce.

The Pine needle scale is another insect that attacks your conifer hedge.

Unlike Cypress aphids, these will start by making your conifer needles turn yellow, brown, and fall off.

A pine needle scale infestation is straightforward to detect.

Typically, they feed on the needles and branches, which not only turn brown but also reduce in numbers.

Juniper scales are other culprits that can brown your conifer hedge.

Similar to Cypress aphids, these insects suck out the sap from new buds, hence making it brown.

If you see dirty white insects with a yellow center, appearing like a small fried egg on your conifer needles, these are known as Juniper scales.

Spruce spider mites are common in the cold seasons of spring and fall.

They feed on conifer needles by using their piercing-sucking mouthparts to suck the sap out of the foliage.

Unlike other insects on this list, they are easy to detect as they leave behind silk threads on the conifer needles they feed on.

The best way to salvage your conifer from an insect attack is early detection and to get rid of them.

You can do this by using insecticide or pesticides to remove them as soon as they start appearing.

Take steps to constantly monitor your hedgerow so that you don’t notice the damage when it’s too late.

Another reason why your conifer hedge is turning brown might be due to bad weather.

Extreme weather conditions such as cold, waterlogging, frost, and prolonged droughts can wipe out your plant.

If the conifer hedge is not getting water in late summer, the needles will start to dry and turn brown.

On the other hand, during winter the plant may lose moisture and dehydrate.

Since the soil does not contain any moisture to support the roots, the plant becomes inactive, which may cause several conifer needles to turn brown.

All faith is not lost as you can still recover your plant after the cold season.

If the conifer needle browns but the part next to the branch stays green, it can regrow.

Patience is key – wait until winter is over and see what happens.

These diseases can be viral, fungal, or bacterial.

Identifying whether a disease has attacked your hedgerow can be quite challenging.

This is because most of them are tiny and can only be detected by examining their symptoms.

The diseases can attack the roots, stems, trunks, and even the needles of your conifer hedge.

The needle cast disease is easy to detect as it causes the conifer to shed their needles.

When it attacks your plant, it starts by yellowing the needles before turning them brown.

The best way to get rid of the needle cast disease is by applying fungicide and removing the affected needles.

If you want a conifer hedge to protect you from noise pollution and strong winds, you must maintain it properly.

Take steps to inspect your conifer hedge regularly – doing so will ensure that pests and diseases do not attack it.

Furthermore, trim it at the right time and be careful not to overdo it!

Preparing your conifer hedge for adverse weather conditions so that it does not suffocate, turn brown or even die.

Last but not least, make sure you get the right conifer hedge for your area.

By implementing these tips, we’re confident that you’ll stop your conifer hedge from becoming dry and brown.

If you still find that your conifer hedge has become dry without your knowledge, don’t panic!

Find out why and correct the issue as soon as possible to keep your conifer hedge in top shape and living its best life!